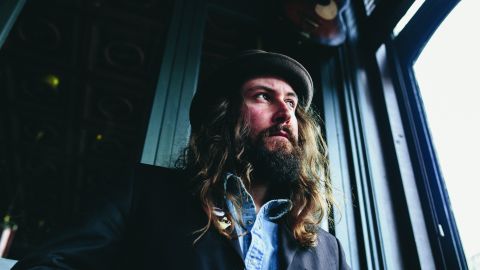 Things are looking up for Jack J Hutchinson. It’s a decade since the Burnley-born songwriter made his ignominious London debut (a gig that ended in a stand-off with a stage invader). Now, with his Pledge target for Paint No Fiction smashed in 24 hours, it seems public opinion has swung behind this bowler-hatted, runaway-bearded, pint-sinking everyman.

Here, Hutchinson strays beyond the confines of his Boom Boom Brotherhood band, submerging his Britishness on an album of Southern-smoked blues-rock with hooks, choruses, the lot. Deal With The Devil, you should already know: this recent Track Of The Week has a Crowes strut and lift-off harmony chorus. Hip Slickin’, too, conjures the Robinsons at their catchiest, far removed from the stodge ‘n’ plod of the twelve-bar mob.

Even the slower moments impress, with Hold Me Close awakening memories of prime-time Oasis, and the affecting Send Me A Signal decorated with strings and jazz brushes. He’s got the charisma and tunes; with a flash of luck, Hutchinson can’t fail.. (9⁄10)

New York’s punk-blues riot girls kicked up some great noise with their 2016 covers set, No B!, and Spiritus marks a smooth gearshift into original material. Lips are still curled, whether that’s Dana ‘Danger’ Athens barking orders over barbwire guitars on the rabble-rousing How Ya Doin’? or the pummelling Black Rat, which is like the world’s scariest Rentokil jingle. Consider us hooked. (8⁄10)

You wait all decade for one bastard-blues project from Long John Laundry, then two come along at once. Running alongside his Killer Blues Collective, these are dirty Byrds indeed, highlights like Lay Me Down and the spaghetti western title track bursting with manic brass and defiled by the protagonist’s low-down snarl. It’s dangerous-sounding, compelling stuff. (8⁄10)

The James Hunter Six - Whatever It Takes

Sweet lord, that voice. When Hunter sings – from the ad-lib holler of Mm-Hmm to the wild honey he pours over big-band rattler Don’t Let Pride Take You For A Ride – there’s nothing else in the world. The sleeve of Whatever It Takes shows the gold-lunged soul man chugging on a cigarette: it’s the best endorsement the nicotine industry has had in years. (8⁄10)

Samantha Fish - Belle Of The West

Just when you thought you had Samantha Fish’s career trajectory mapped, she slips the net. Belle Of The West is the best kind of reinvention, the Kansas bandleader deftly stirring country flavours into her blues foundation, and delivering highlights like Need You More and Daughters with such trembled sincerity that you can’t accuse her of chasing the yee-haw dollar. Impressive. (8⁄10)