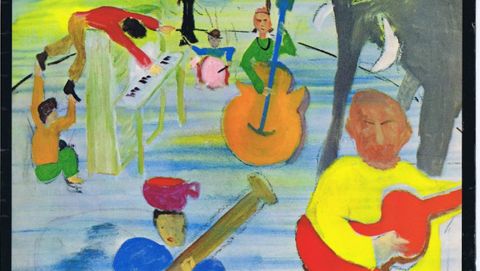 Often cited as Year Zero for what became Americana, The Band’s debut album, produced by John Simon, remains a thing of beauty, created (as the original note had it) in “BIG PINK, a house seated in the sun of Overlook Mountain in West Saugerties, New York”. In other words the perfect rural retreat for four Ontarians and an Arkansas man. They weren’t the first to swap concrete for clay; Traffic had already done that, although it’s fair to assume that Rick Danko and co. were probably handier with a chainsaw.

This newly mixed and mastered 50th Anniversary Edition doesn’t differ greatly from the 2004 Japanese issue, which included all the bonus tracks except the a-cappella I Shall Be Released, but devotees will like the Blu-ray, the pink vinyl option, the seven-inch repro of The Weight single and the hardback book. Even without the bells and whistles the music from the 1968 sessions retains a timeless outlaw appeal apparent from Bob Dylan’s Tears Of Rage, the mighty Chest Fever and Robertson’s biblical epic The Weight, driven home by Helm’s magnificently lived-in southern drawl.

The Band were massively influential: everyone from The Beatles, Beach Boys and Grateful Dead borrowed their progressive country chic. They in turn copped ideas from Dylan’s Desolation Row, notably on Lonesome Suzie, which owes a debt to Charlie McCoy’s guitar work. Great tracks are studded all over. Caledonia Mission fired up Workingman’s Dead and Van Morrison’s It’s Too Late To Stop Now, and you hear To Kingdom Come percolate through the Boys’ Holland.

Outside the blueprint, The Band tackle Long Black Veil (they’d have known Lefty Frizzell’s original) and went popcorn on We Can Talk. The stand-out may be Manuel’s troubled vocal on In A Station, accompanied by Hudson’s clavinet, a piece so sparse it persuaded George Harrison he could steer The Beatles towards fresh territory, citing his new pals as “the best band in the universe”. The six extras include Helm’s small-town talk take on Robertson’s Yazoo Street Scandal, a redneck tale of red-light activity, and Charlie Segar’s Key To The Highway. Well worth refreshing with its delights, Big Pink is a marvel of a debut.