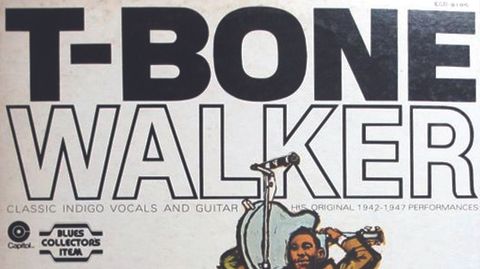 The Great Blues Vocals & Guitar was a 1962 Capitol LP drawn from Walker’s work for the Black & White label during 1946-47. Soul Jam augment it here with 16 tracks, mostly from the 50s, when Walker had moved to Imperial. The other Soul Jam CD reinstates two early 60s LPs of Imperial material from the previous decade and adds a few bonus tracks from the same period.

This background detail is necessary, because it needs to be stressed that Walker’s work for Black & White and Imperial was epoch-making – a new way of delivering the blues. Cool, worldly, Walker cut a figure quite unlike his contemporary Muddy Waters. Even after years in Chicago, Muddy still spoke in a countryman’s voice and echoed the thoughts and feelings of an audience he had largely carried with him from Mississippi. T-Bone, on the other hand, was a wholly urbanised man, in vocabulary and intonation, in the way he handled his guitar and the way he presented himself. He was a skilful exponent not only of blues numbers such as Call It Stormy Monday or T-Bone Shuffle but of pop songs and sleek ballads including I’m Still In Love With You, where he proves himself every bit as versatile as his west coast contemporaries Charles Brown and Cecil Gant.

It’s music of great importance in the story of the blues.

But if you’re listening with an ear less for his voice than for his guitar, these CDs are a procession of exquisite moments, from the chordal intros to West Side Baby, Wise Man Blues or Alimony Blues to the two choruses in News For My Baby, which are a concise demonstration of the fluency and invention Walker brought to blues guitar playing. Or listen to the opening instrumental choruses of Life Is Too Short and High Society: BB King starts here.

So these are thoroughly worthwhile releases, yet it’s hard to recommend them without reservations. If you’re curious enough about T-Bone Walker to contemplate buying 50-odd tracks by him, you’d do better to acquire a boxed set with twice as many, which is likely to work out cheaper. Soul Jam promote their CDs as digital facsimiles of out-of-print albums, using phrases like “long unavailable on any format”, but “long unavailable” applies only to particular track selections made 50 years ago by an Imperial or Capitol Records staffer; virtually all the material on these two CDs has been available for decades, and can be found in (for example) recent boxed sets on Acrobat and Real Gone.

But if you prefer the Soul Jam concept, note that three cuts – Alimony Blues, News For My Baby and No Reason – appear on both these CDs, and a further six were on a 2014 set on Soul Jam’s sibling label, Hoodoo. Also, large parts of the sleevenotes appear in both booklets. All that said, this is a reasonably priced way of obtaining an excellent cross-section of Walker’s output in his most creative and influential period. It’s music of great importance in the story of the blues, but, unlike some historically significant recordings, it’s also constantly informative and unfailingly entertaining.