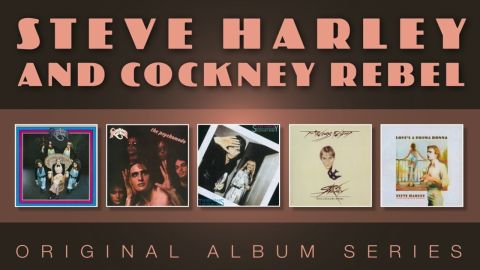 A hack for the East London Advertiser who swapped deadlines for limousines, Steve Harley remains a hero to desk job dreamers everywhere. Between 1973 and 1976 he was writing his own headlines, as this no frills collection of his first five albums proves.

If the noir-ish cabaret of The Human Menagerie – complete with ten minute finale Death Trip – offered an artsy yin to glam’s bootboy yang, it took until 1974’s The Psychomodo for him to really hit his stride, his highbrow lyrical babble set to woozy, violin heavy tunes Marc Bolan wouldn’t sniff at.

1975’s The Best Years Of Our Lives finds Harley – now effectively a solo artist – in his smartarse pomp, with hooks to match (Panorama, Make Me Smile (Come Up And See Me), before coming back down to earth on a funkier, if less thrilling Timeless Flight. His last studio album with Cockney Rebel, 1977’s Love’s A Prima Donna sees him incorporate elements of doo wop, reggae, prog and soul into an at times impenetrable choral rock onslaught where a breezy cover of The Beatles Here Comes The Sun provides welcome respite.

Fans will know this stuff backwards, but for anyone curious about Harley’s complex muse, this is where to start.