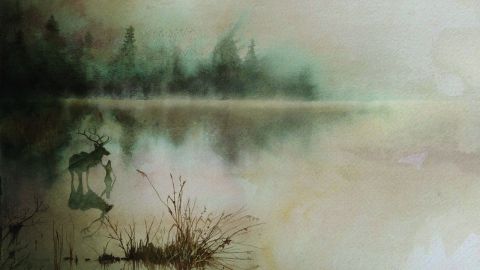 Even among their starry-eyed postmetal brethren, among whom audacious experimentalism is the common currency, Reykjavik’s Sólstafir have emerged as an incandescent vanguard among voyagers. 2014’s Ótta cemented their status as bona fide visionaries, conjuring a bleak and transfixing realm of harsh, windswept riffs, stunning melodic interludes and towering climaxes of explosive potency. This leaves them with the challenge of following-up an unqualified masterpiece. Unsurprisingly, Berdreyminn is a work of staggering depth, tapping into an ethereal netherworld of droney guitars, mournful piano-driven dirges and prismatic crescendos that converge beyond the five bodily senses. From first single Ísafold, a new vibe emerges, wholly distinct from Ótta, playing out in pulsating 80s tempos and a gauzey backdrop of moody atmospherics. Other tracks like Nárós and highlight Dýrafjörður open as gaunt, elegiac ballads before erupting into pummelling hard rock grooves so thick you can hear the guitar strings vibrate. Produced by Birgir Birgirsson (Sigur Rós, Alcest) and Jaime Gomez Arellano (Ghost, Paradise Lost, Oranssi Pazuzu), Berdreyminn conveys a sense of accessibility and warmth somewhat absent from Ótta, without sacrificing that sense of stark solitude so integral to their sound. A haunting and wholly immersive voyage that captivates more with each progressive spin.