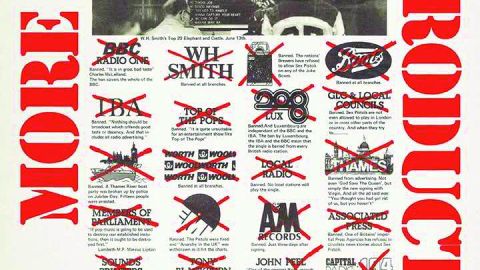 The Sex Pistols ‘third’ album, Some Product, Carri On Sex Pistols, released in 1979, long after frontman Johnny Rotten’s acrimonious departure, is a hastily cobbled-together collection of the Sex Pistols talking, mostly on the radio – banned radio ads, the odd snippet of music, Grundy swear words included. As such it shouldn’t work on any level – the calculated money-grabbing cynicism behind such a release was going some, even for manager Malcom McLaren – but it does, sometimes gloriously.

In particular, the Yank-goading American phone-in session Big Tits Across America, snatches of which this reviewer can still recall 40 years on. Such gleeful, despicable, riotous, laddish banter – the sound of four lads not quite believing the gullibility of those around them, and taking full advantage.

Often it feels like the least tutored moments are the most revealing when it comes to stripping bare myths. Rotten is a caustic delight, Paul Cook and Steve Jones willing dupes, the music industry a shameful smug mess. Pointless and gratuitously objectionable, but you could argue the same for spiritual peers Peter Cook and Dudley Moore.

In keeping with the spirit of the original, this reissue (which includes a Radio 1 interview from 1977 and two previously unreleased radio interviews) is a rip-off, but that only adds to its ‘charm’. Twenty-four quid for a three-CD spoken-word set?! McLaren would be proud.