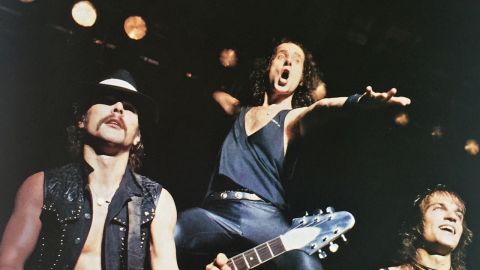 Scorpions have added another layer of bewilderment to the increasingly complex world of deluxe edition reissues, celebrating a half century of teutonic dominance not by repurposing their entire back catalogue, but by carefully repackaging the albums released during one eleven-year period and ignoring the rest.

The process starts with 1978’s Taken By Force (the band’s last studio album featuring mystic space warrior Uli Jon Roth) and continues until 1988’s Savage Amusement. There’s no room for the band’s first five albums or their last eight, so no In Trance, no Virgin Killer – thankfully, perhaps – and no Winds Of Change, the song that somehow seems like it single-handedly ended the Cold War.

What’s left has been given a right seeing-to, however, and each disc is available as a CD with a thoroughly decent selection of bonus demo tracks and a DVD featuring videos, interviews and live TV clips. The vinyl editions – which also include the albums on CD, but not the DVD – can be collected individually, or purchased as a limited edition, numbered, credit-shattering box set.

Taken By Force’s (7⁄10) androgyny celebrating He’s A Woman, She’s A Man and the same album’s driving opener Steamrock Fever both sum up the band in the year punk broke, with racing, surprising spiky riffs, while the following year’s Tokyo Tapes (8⁄10) can sit comfortably beside Made In Japan or Live And Dangerous as one of the great seventies live packages.

Animal Magnetism (7⁄10) is lacklustre, but does feature the band’s finest moment, The Zoo, a chugging, hypnotic tribute to New York’s red light district, while 1982’s Blackout (9⁄10) is a vicious return to form, from the clattering title track to the epic closer When The Smoke Goes Down.

Love At First Sting (8⁄10) climbs to similar heights and features the brilliant Rock You Like A Hurricane and another huge ballad, Still Loving You, while World Wide Live (7⁄10) captures the band at their pyramid-building and imposingly practised peak.

Savage Amusement (6⁄10) follows Def Leppard down the path to polished, radio-friendly nirvana but stumbles along the way and ends up lost and floundering for direction, but it’s a rare slip.