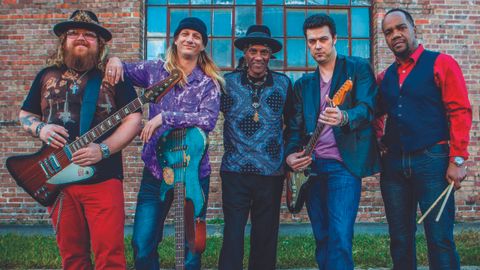 What to do when two original members of your supergroup, including one carrying a revered surname, leave the fold after two albums? Just recruit from another celebrated bloodline, of course.

After the success of their eponymous 2012 debut and last year’s HeartSoulBlood, Royal Southern Brotherhood’s founding members Devon Allman (son of Gregg) and Mike Zito amicably departed, but that’s not about to get in the way of album three. Enter Tyrone Vaughan (son of blues royalty Jimmie) and charismatic Nashville stalwart Bart Walker to take up guitar duties – alongside original members Cyril Neville, Yonrico Scott and Charlie Wooton – and the show is back on the road.

Recorded at the Fame Studios in Muscle Shoals, Alabama, Don’t Look Back is a heady brew of blues, rock, funk and soul that refuses to be pinned down. A good thing, right? Mostly. As towering slabs of blues-rock go, there’s no arguing with I Wanna Be Free as a statement of intent. The dual vocals of Neville and Walker provide a shifting dynamic, seismic riffs and muscular guitar solos being dutifully ticked off.

Reach My Goal suggests the band are resisting the lumpen blues-rock of their peers by bringing funk front and centre, the rhythm section of Scott and Wooton proving nimble and fiercely tight. Don’t Look Back is swampy, deeply southern and not unfamiliar with Bob Marley, while Hit Me Once and The Big Greasy further raise the funk quota, the latter resting on a lowdown riff reminiscent of Curtis Mayfield’s Freddie’s Dead.

The second half, however, loses some strength and focus. If there’s a flipside to throwing everything into the gumbo, it’s that an album, especially across 14 tracks, can sacrifice some identity. Better Half – Neville’s ode to his wife – is closer to mainstream R&B and is just the wrong side of saccharine, while Penzi and It’s Time For Love flirt with a Latin flavour and the perhaps ill-advised spectre of George Benson.

They Don’t Make ’Em Like You No More stands out in the latter half with its horn-drenched celebratory funk and Poor Boy comes on like tough-as-nails Texas blues, but closing track Anchor Me is a lifeless ballad on a record that could easily have been a couple of tracks shorter.

The musicianship is high throughout, as you would expect of the pedigree, but ultimately there’s a little too much going on, its disparate ethic somehow lacking cohesion. Hit and miss./o:p