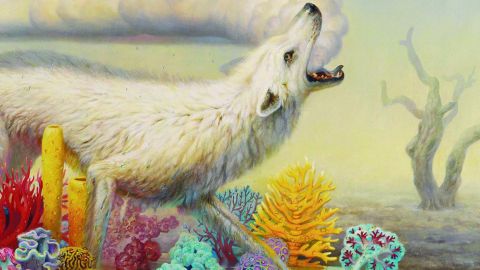 Since their 2011 major-label debut Pressure & Time, Rival Sons have consistently pulled off the trick of channelling the greats of decades past with a resolutely retro sound, while remaining current. Firm believers in making music that is impassioned, spontaneous and unpolished, the Californian blues-rockers now return with their fifth studio album and, reassuringly, it’s pretty much business as usual.

Entering the studio with no preparation and building their records from the ground up has become the band’s modus operandi and, true to form, Hollow Bones was written and recorded in only three weeks, just prior to hitting the road supporting Deep Purple. With their favoured producer Dave Cobb back at the helm, it’s a relatively slight album, clocking in at around 35 minutes and with only three tracks troubling the four-minute mark, yet it manages to pack in an array of flavours.

The opening trio of songs are the most effective: taut, punchy and brimming with conviction. Lead-off single Hollow Bones, Pt 1 hinges on a spare and heavy groove, Jay Buchanan’s ascending vocal line creating palpable tension and release for its towering refrain. If the persistent comparisons to Led Zeppelin irked the band in the early stages of their career, it’s still difficult not to hear Messrs Page and Bonham seeping through Scott Holiday’s fractured guitar solo and Mike Miley’s thunderous drums.

Buchanan’s former status as an acoustic folk singer occasionally allows a softer element to surface in his delivery, the 60s-tinged croon of Tied Up giving way to a lusty chorus. With the Californian mysticism of Thundering Voices, all portentous riff and echoes of native American chanting, the frontman sounds like an interesting guy. Enjoyably disparate, but linked by irresistible hooks and melody, you can already hear most of these tracks being bellowed back toward the stage by the live audience.

If the mid-section doesn’t quite scale the same heights, there’s still plenty to enjoy in the defiant groove of Pretty Face and the dramatic, slide-drenched atmospherics of Fade Out. An inspired choice for the sole cover version, too, the only issue with recreating a very specific performance – namely Humble Pie’s superlative rendition of Black Coffee – is that it misses some of that Marriott mischief. It’s a minor drawback though, Cobb’s spacious production and live approach allowing plenty of the band’s personality and chemistry to shine though. A solid return.