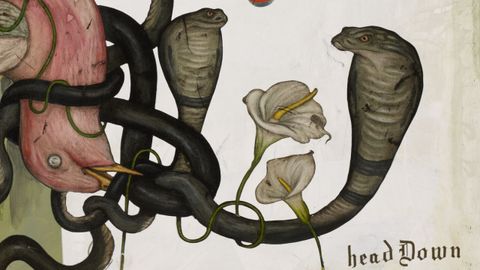 Make a list of prerequisites for any band at the heavier end of things and Rival Sons seem to have the lot: attitude; big, bad riffs; wild-voiced singer; great clothes; a fair spread of facial hair; and louche-livin’ songs about babes ’n’ bourbon. Last year’s terrific second album Pressure & Time, their first on UK label Earache after self-releasing their debut in 2010, suggested a band very much in thrall to the time-rinsed tropes of Led Zeppelin, Free and Humble Pie.

Not in any ersatz retro way, but with a zip and grace that placed them more as torch-bearers for a certain kind of raw, declarative blues’n’roll that’s increasingly become compromised by the advent of autotuning and all that digital gumpf. Pressure & Time served as a youthful rallying cry for those of us who like rock music dished up in its natural state. The band clearly valued the simple frisson of four blokes jamming together in the same room, the crackle of energy climbing the studio walls. A record where you could, as they say, hear the dust. As guitarist Scott Holiday has asserted, their aim was to bring the world some much-needed “dirty rock’n’roll”.

Follow-up Head Down sounds even more spontaneous. And, as if to make good on singer Jay Buchanan’s promise in these very pages earlier this year, the quartet appear intent on unburdening themselves from the Zep/Free comparisons that have begun to weigh heavy. Holiday’s pre-release blurb had hinted at a bundle of “fist-pumpers and ass-shakers”, along with some ballads and “straight-up freakouts”.

He’s not wrong. It’s a great set of songs alright, but the hidden beauty of Head Down rests in the sonic detail, the fluid shifts in texture and mood. Keep On Swinging opens things up in fairly predictable fashion. A pugnacious guitar riff, the rhythm section of Robin Everhart and Mike Miley locked in hard, Buchanan yelping like the young Paul Rodgers. Along with a fair sprinkling of these songs, it’s primarily about the empowerment of rock’n’roll itself.

But then along comes Wild Animal. This time Buchanan’s voice is smoother, and the whole shebang is ridden aloft on a pimped-up Motown beat. The same hedonistic groove underpins Until The Sun Comes and All The Way. The former is perhaps a little too sweet for regular Sons worshippers, though the latter’s mix of Holland-Dozier-Holland, almost-spoken narrative, squealy licks and Norman Greenbaum-style guitar break is oddly compelling.

Elsewhere, if All The Way suggests that Buchanan’s been listening to John Fogerty and Otis Redding of late, then The Heist is a more bruising affair that hitches Holiday’s hard-blues riff to something approaching a forlorn 60s ballad. A song about a man inching towards his endgame, electing to provide for his family by doing a bank job, it could be Scott Walker sprouting whiskers and hanging out at the Fillmore with Steppenwolf. Factor in a snaking tremolo break straight from Link Wray and you have something very special indeed.

Perhaps best of all, and the most telling sign yet of the band’s desire to both break away from expectations and allow themselves some added leg room, is the double delight of Manifest Destiny Pts.1 and 2. The first is an eight-minute mini-epic that details the tragic plight of what appears to be a Native American out hunting for buffalo, spying the tracks of an army wagon and returning home to find his community wiped out. Sung in a keening falsetto over the ominous sustain of a distorted guitar, it could be an imaginary soundtrack to some Godless Peckinpah western. The sprawling blues-rock of the finale is presaged by Holiday’s prime moment on the album – an extended solo that’s as lyrical as it is breath-catching.

Manifest Destiny Pt.2, meanwhile, is the payback. ‘My wife and children had hair so black/And there’s nothing you can do to bring them back,’ sings Buchanan, as a boiling riff essays a vengeful tale of taking soldiers’ lives at dawn. The album closes out with True, a hymnal acoustic folk tune with Buchanan intoning like a lapsed choirboy over picked guitar: ‘_We will lift our voices/We will pray together’. _It’s a supremely tender moment.

Which brings us back to Rival Sons themselves. Far from the rockhounds their appearance might imply, they’re a bunch of laid-back family men, an all-vegetarian band guided by a love of spiritualism and a mistrust of the excesses of being musicians on the road. They’re living the rock-star life, it seems, but only through the vicarious fantasias of their own songs. Which, on this form, is as good a place as any to do it.