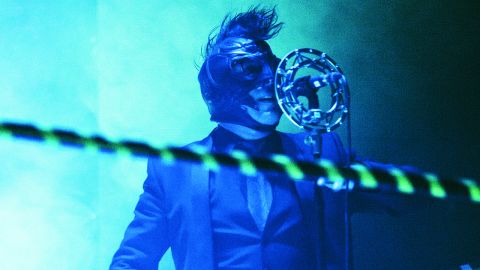 The Roundhouse is a genuinely legendary venue, making its name back in the 60s when Pink Floyd and The Soft Machine launched a period that saw it host everyone from The Doors and Led Zeppelin to David Bowie and The Ramones. But surely, even in those psychedelic, mind-altering days, it has never seen anything like Puscifer this evening.

It’s been nearly 10 years since this curious little band first crept into view, and tonight the UK gets its first glimpse of what this project has morphed into in that time. The results are as bizarre, as bonkers and as breathtaking a live performance as can be. Before the band even take to the stage we are treated to half an hour of Luchafer wrestling – an even more cartoonish, silent movie-esque take on the Mexican Lucha Libre style – and a video of Maynard James Keenan in full military regalia warning all us “Pussies” to keep all phones and recording equipment away from the glare of the stage or face ejection. Different band, same old Maynard.

The roar that goes up at the mere glimpse of Maynard, who spends most of the first act at the back of the wrestling ring, dimly lit and dressed in a gimp mask like some kind of Batman/Daffy Duck hybrid, is loud enough to prove that the man is still a genuine cult icon. And when his voice, icy yet warm, heartfelt yet deeply sarcastic, is let loose, you remember just why this is a man so revered by so many. Even with the Luchafer slinging themselves around him, remote-controlled chickens, huge screens projecting images that are part Flash Gordon, part Rocky Horror Picture Show, part Spaghetti Western and a band featuring world-class musicians such Ministry bassist Paul Barker and A Perfect Circle drummer Josh Freese, the singer still manages to drag your attention to him. All this cabaret would mean little if the music didn’t add up to much, but Puscifer, like an animated, intergalactic version of QOTSA, have the tunes to back up the visual headfuck. The Remedy seethes with funk-laden intent, and The River sounds as dangerous, yet deceptively calm, as the deepest darkest waters. By the end it feels like we’ve been licking a toad for the past two hours. Mindbending, brain-frying, totally unique and definitely worth the wait. Gig of the year. Done.