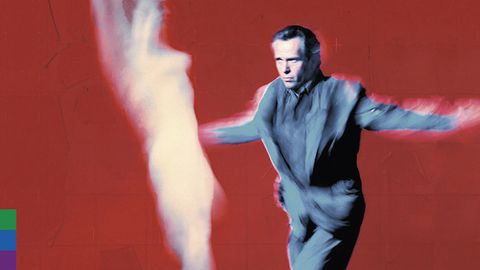 If in 1986 – peak 80s – you’d suggested that So, Peter Gabriel’s biggest-selling and most MTV-promoted album, would be enjoying a vinyl release in 2016, you’d have been laughed out of town. Yet the resurgence of the most inconvenient medium imaginable continues, with Gabriel, something of a digital pioneer, praising its “warmth and presence”. His three albums as a card-carrying international superstar – released across 16 years – now arrive remastered on heavyweight 180-gram LPs: So is spread across two, Us and Up across three each.

So (6⁄10), of course, took the Fairlight synth and added a palatable dash of world music to art pop. Maybe it’s down to overfamiliarity, but it hasn’t aged as well as you’d think: the irritating if well-named Sledgehammer is a faux-funk stinker. Yet Don’t Give Up (with Kate Bush), Red Rain and In Your Eyes find raw emotion amid the showboating: his voice exudes a sandpapery soul.

From 1992, Us (8⁄10), also co-produced with Daniel Lanois, resides in a rich halfway house between his more personal work and what his expanded audience now expected. Lyrically it digs deep into family and love-life traumas. Guests include Brian Eno, Peter Hammill, William Orbit and John Paul Jones.

A decade later, the underrated Up (8⁄10) has forsaken fair-weather fans and relocates the muse that made him such an affecting maverick in the first place. From the opening broods and stabs of Darkness and Growing Up, it’s as beguiling and enigmatic as So is obvious.