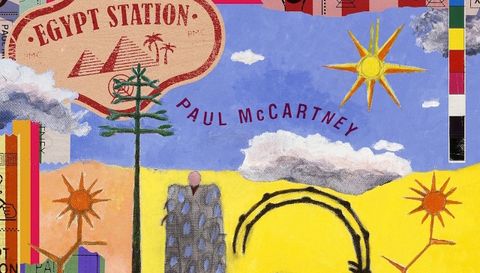 It’s been five years since Now, the pumped-up, amped-up album Paul McCartney recorded with hip producers like Mark Ronson. Now, in a classic Macca flip, he returns to the more traditional rock sounds of Memory Almost Full, his best album of the millennium so far.

Egypt Station is a song collection more than anything else, a set of melodic statements by rock’s greatest optimist. And it’s very good. From the brilliant first words of opening ballad I Don’t Know – ‘I got crows at my window, I got dogs at my door’ – to the sly backwards guitar of Dominoes (one of the few reminders that McCartney used to be in The Beatles, as if he doesn’t like to mention it), all the way through the strikingly named Fuh You and the end medley of Hunt You Down/Naked/C-Link, this is McCartney with the minimum of fuss, just verse and chorus and seemingly effortless songwriting. Arrangements are light but always with a sudden moment of hookiness, lyrics are generally up and the whole thing is run through with confidence.