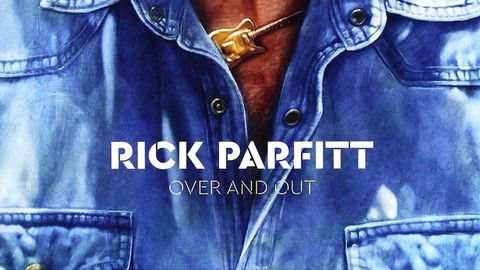 Over and Out Deluxe boxset

Over and Out is available as a deluxe boxset that includes two versions of the album. One version is mixed by top producer Ash Howes – polished and big sounding – and the original band mixes. No-one know which Rick would prefer, so the album is available with both.

His Telecaster is silent. That right arm jackhammers no more. But one of the world’s finest rhythm guitarists has left us a gem of a farewell.

Two months before he died on Christmas Eve 2016, Rick Parfitt told Classic Rock’s Dave Ling: “In my heart I’m a rocker. I’ve always been… If I’m going to make music, it’s got to rock.”

We might therefore expect Over And Out, his first solo album, to be in the vein of the vintage Quo music he revelled in revisiting on the Frantic Four reunions of 2013 and ’14. But it’s not. Instead, this album reflects Parfitt’s acute pop sensibilities. Almost every one of the 10 tracks plays like a would-be single. Five of them sound like Quo, but the others most certainly don’t.

There is a second version of the album, ‘The Band’s Mix’ (available separately on vinyl and included on the two-CD collector’s edition; the difference between the two is minimal), but the main, posthumous, mix by pop specialist Ash Howes is better. Parfitt would have wanted it this way.

Particularly impressive is the combination of Parfitt and his guitarist/keyboard player producer Jo Webb, who also co-wrote six of the songs, ranging from rocking opener Twinkletoes (with a Brian May guitar solo) to the helplessly romantic When I Was Fallin’ In Love.

Those who prefer 12-bar rockers can find them in Lonesome Road, Fight For Every Heartbeat (with great piano by Shannon Harris, and a lyric that reflects on the health scares that ultimately ended Parfitt’s life), and maybe even Lock Myself Away, a rockabilly shuffle.

And yet the strength of Over And Out might, ironically, be the softer rides: the title track (the poignant sound of a man reflecting on his advancing years) and the superb Without You, a ballad with piano, synthesised strings, sweeping backing vocals and genuine echoes of Queen.

There are two songs by David John (writer of hits for Quo since the mid-80s). The first, Long Distance Love, is a cheerful rocker. The second, Everybody Knows How To Fly is one of the album’s cornerstones, and features with Bob Young on harmonica and some fine slide guitar by Wayne Morris.

Closer Halloween is the closest track here to the old-school – like one of those big numbers that Quo closed their classic albums with (think Slow Train on Quo, with percussive vibraslap and big keyboard fills). A great track, and even at five minutes it’s over too soon. Which sums up how we feel about its creator.

Over And Out does Rick Parfitt proud.