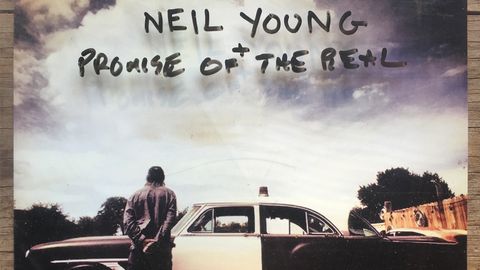 The joy (and sometimes frustration) of Neil Young is that not just decade by decade, but album by album, you never know which Neil Young will turn up. Lovelorn romantic? Grumpy old man? Angry, eternally youthful rebel? Mischief-maker? Car maven? And it’s all against backdrops that may be as gentle as Crosby, Stills & Nash, as raw as grunge, as wistful as country, or as maverick as the mood takes him. Right now, his mood is kaleidoscopic.

Young’s second studio collaboration with Promise Of The Real, the adaptable ensemble fronted by Willie Nelson’s son Lukas, is loosely linked by its anti-Trump undertow (‘No wall, no hate,’ he chants on Already Great), but it’s a smorgasbord of styles.

The opening Already Great clatters its raggedy way into the room like a party drunk, with clanging, atonal guitar, echo-laden drums and a pub piano, before Young reminds us, ‘I’m Canadian by the way, and I love the USA.’ Then it soars into an elegiac, supertight chorus.

Diggin’ A Hole is scratchy blues; Almost Always could have graced Harvest Moon; Stand Tall and Children Of Destiny are earworms; but if you want beauty, you’ve got it on Carnival, once the cackling stops. Neil Young is reborn, yet again.