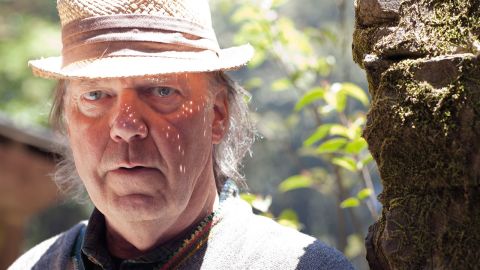 Neil Young has long been a vigorous eco-warrior, flagging up his environmental concerns as early as 1970’s After The Gold Rush. But his growing standing as one of rock’s elder statesmen appears to have sharpened his focus of late. 2015’s The Monsanto Years was twofold: a plea for a more sustainable world and a bitter swipe at the US biotech giant of its title. The ensuing tour, with backing band The Promise Of The Real, yielded this summer’s Earth, a not-quite-live album wherein songs about healthy living and GM foods were liberally mixed with sounds from the natural world.

Peace Trail follows a broadly similar theme, although it’s a little more straightforward musically. Forgoing his most recent backing band, Young has instead chosen to recruit bassist Paul Bushnell and veteran drummer Jim Keltner for an acoustic-rooted set of songs, recorded over a few days at Rick Rubin’s studio in Malibu. This informal approach (everything laid down in one or two takes) means that Peace Trail is pleasingly rough around the edges, the skeletal arrangements serving as an unobtrusive backdrop to Young’s lyrical musings.

Indian Givers is a prime example of where his current energies lie. Over a simple guitar and percussive framework, Young pledges support to the Native American protests over the Dakota Access Pipeline. ‘There’s a battle raging on the sacred land,’ he declares in his distinctive piping tones. ‘Our brothers and sisters have to take a stand.’ Like most things here, the song is also a wider commentary on federal and governmental policy.

One of the album’s most pertinent moments is Terrorist Suicide Hang Gliders. It’s a song that addresses institutionalised xenophobia and fearmongering, a savage critique of bigotry at a time when it seems to have become part of the American political agenda: ‘I think I know who to blame/It’s all those people with funny names/Movin’ into our neighbourhood.’

The cordiality of the music is upset by sudden ruptures at strategic points in these songs, Young venting his anger with stray bursts of harmonica or, more usually, loud convulsions of guitar. It’s admirable to see him so inflamed, be it railing against police brutality on John Oaks or bemoaning a nation in spiritual crisis on My Pledge. And while it may not be the most musically involved album of his 50-year career, it’s persuasive evidence that Young still has a lot to offer.