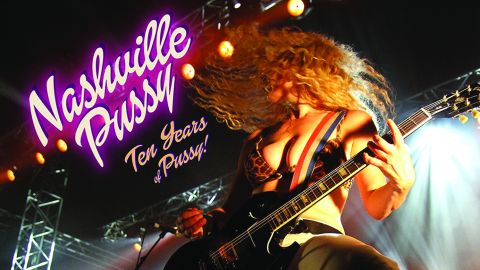 Sometimes it’s hard to beat the press release: “NASHVILLE PUSSY are a band who hail from Atlanta, deep in the heart of ‘the BBQ NATION’ and sound like ACDC slap boxing with LYNYRD SKYNYRD while MOTÖRHEAD watches.” And that’s pretty much it.

The band formed in 1997, and over the course of a thousand plus gigs the husband-and-wife team of Blaine Cartwright (vocals, rhythm guitar) and Ruyter Suys (lead guitar), plus various badass conspirators (notably original bassist and towering inferno Corey Parks), have roared, ripped, pummelled, sweated and cussed their way through their rampant hybrid southern rock/psychobilly/metal in 40 countries.

Taking the original template laid down by MC5 and the Stooges to extremes, Nashville Pussy’s music exemplifies the core values of drinking, fucking, fighting and swearing in the streets. And more drinking. And more swearing.

It’s hard to choose between the three albums on offer here: 2009’s From Hell To Texas (8⁄10) features the cautionary Dead Men Can’t Get Drunk and rocks like hell ripped apart, stone by festering stone, by deranged metal-head berserkers.

2005’s Get Some! (7⁄10) features the classic (if not classy) Pussy Time and a demented cover of Nutbush City Limits, and rocks like Ozzy’s left testicle.

If pushed, though, start with the new comp, Ten Years of Pussy! (9⁄10). It has a tribute to Thin Lizzy’s classic Live And Dangerous on its gender-reversal cover, rocks like a mutha, features a guest appearance from Lemmy (on the blistered Lazy Jesus), the classic The South Is Too Fat To Rise Again and rocks like a mutha. Oh wait, did I already write that? Okay. Well this one rocks like a fucking motherfucker.