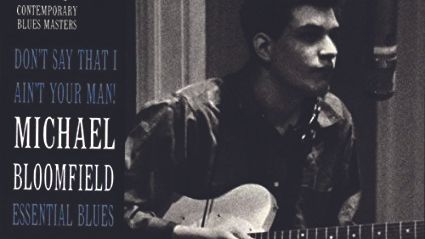 Never knowingly overwhelmed, when Mike Bloomfield met Bob Dylan in Chicago in 1963, he pronounced Dylan’s debut album “shit”. In response, Dylan declared that Bloomfield was his guitarist of choice.

Two years later, the pair were in New York recording Highway 61 Revisited and taking Dylan publicly electric at the Newport Folk Festival. The world seemed to be Bloomfield’s, but the blues purist spurned Dylan’s offer of a permanent sideman role in favour of working with the Butterfield Blues Band, then the Electric Flag, then having a solo career. Bedevilled by insomnia and heroin, he overdosed fatally in 1981.

These complementary showcases for Bloomfield’s extraordinary way with a Gibson Les Paul show just what the fuss was all about. Originally released in 1994, Don’t Say That I softwareuiphraseguid=“f597b151-bfa7-4b1c-958f-f213b7b201f3”>Ain’t Your Man: Essential Blues 1964-1969 (7⁄10) bills him as Michael and is Dylan-free, but Bloomfield is breathtaking on the Butterfield Blues Band’s Work Song, and his Al Kooper collaboration, Super Session, is a clash of titans.

It shares two tracks with Live At Bill Graham’s Fillmore West (5⁄10), which was culled from two weekends of jamming in 1969. It’s not wholly unindulgent, but when Bloomfield takes the 15-minute Blues On A Westside home it sizzles.