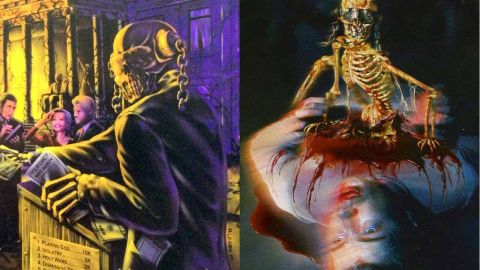 Bringing new meaning to the phrase 'own worst enemy', Dave Mustaine has ridden Megadeth almost off the road more than once. When he’s moved to call their 1999 Risk album a ‘nadir’, you know something is truly up in the House of Dave.

Thankfully, by 2001’s The World Needs A Hero (6/10), Megadeth were beginning to right themselves.

It's a superior (read: heavier) record than its predecessor, and full of the bite and snap that made us all love Megadeth in the first place. Not least in the bile-fuelled 1000 Times Goodbye, written when things were clearly not going well at home for Dave. The cursory reissue extra here is a rattling, live Coming Home.

By 2004’s The System Has Failed (7/10), Dave had broken up the band, fallen off the wagon and lost the use of his arm, naturally. Even more surprising then, is how punchy this album is. Political, murderous and full of intent, it’s a metaphorical flurry of punches to the kidneys.

Especially good is the venomous Kick The Chair and the rumbling, Blackmail The Universe, while live extras come in the shape of Time/Use The Man and The Conjuring.