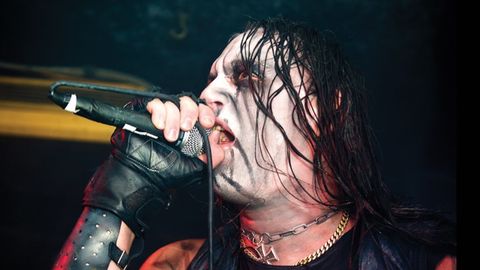 Despite the far too godly time of 6.15pm, a good proportion of tonight’s sold-out crowd are here from the death to catch Liverpool’s ETHEREAL [7] prove there’s still life in symphonic black metal yet, and France’s BLISS OF FLESH [5] put on a show of almost entirely unwarranted triumphalism.

BELPHEGOR [8] take their sweet time in getting to the stage and the introductory music that primes the audience for their arrival leaves those gathered at the barrier (a terrible idea in a venue known for allowing such closeness to the bands) exasperated and in tangible anticipation.

Belphegor don’t disappoint once they deign to grace us with their presence, and tonight the Austrians are on fire. Frontman Helmuth’s brush with death (after contracting typhus) has left him with a new lease of life and they’re on incredibly brutal form. Gasmask Terror incites pits towards the back of the packed room while Black Winged Torment takes off and soars above the crowd on wickedly catchy hooks and riff-work that burns, before Lucifer Incestus enables the brave to completely lose their minds. Belphegor are well and truly back from the dead./o:p

MARDUK [9] have a tough act to follow but the recent Frontschwein sees them recapture the spirit first heard back in the early 90s. For bands who have been around for as long as Marduk, it’s difficult to continue to bring that passion to the stage every time, but tonight the Swedes show no signs of tiring. Frontschwein bursts into life and is followed by a delirious rendition of The Blond Beast while the crowd push forward, backwards and upwards, lost in the moment.

Older tracks rear their blackened souls and Slay The Nazarene and 502 incite a frantic response. The band’s new material, such as Wartheland and Afrika, holds its own next to classics; Warschau pulsing with malevolence, while Mortuus stalks the stage pouring spite. The calls for more are deafening and Marduk abide with a devastating The Black… which feels as vital today as it did in the early 90s.

Marduk may have 20-plus years under their bullet belts but tonight proves that their arsenal isn’t even near depleted./o:p