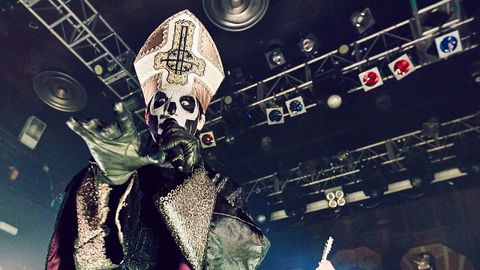 Beelzebub has a devil put aside for Ghost, whosweep into Manchester at the end of a triumphant year that saw them score a US Top Ten with their acclaimed third album Meliora.

Midway through the set, Emeritus slips off stage to ditch his papal garb, returning bare-headed in a dapper greatcoat. Pure Dave Vanian, with a dash of Beetlejuice. Meliora tracks dominate this second half, including the anthemic single Cirice and the polished melodic roar of He Is, which is how ABBA might have sounded if they worshipped Satan. Monstrance Clock, a witty celebration of the female orgasm, forms a suitable climax. Ghost may be a fairly conventional pop-metal proposition at heart, but deadpan Nordic humour and superlative theatrical presentation elevates their live show from goth-rock pantomime to graveyard smash.