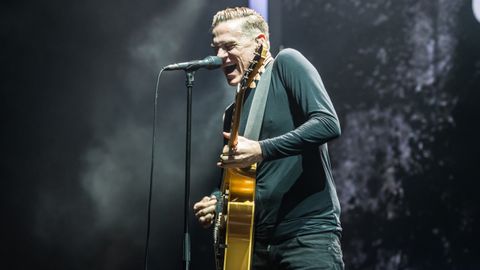 Thirty years later and Bryan Adams’ Reckless still sounds as vital and fresh as when Run To You first went rocketing around the world, taking Adams and his band into rock’n’roll’s stratosphere.

An album with 10 songs – six of them singles – that defined Adams’s career forever and made him as rich as a king./o:p

Time’s been kind to Adams and his songs. He turned 55 in November and is still svelte, his reddening pompadour’s intact and his voice is still as strong as it was when he launched Reckless an unsuspecting world. That album makes up the first half of the show, with the addition of two outtakes, the thrashy title track – which acts as the opener and causes a few looks of consternation around the arena – and the lilting Let Me Down Easy. /o:p

But it’s the insistent snare of One Night Love Affair that brings the 02 to thrumming life. On stage, long-standing guitarist Keith Scott (who’s a dexterous revelation) and Adams criss-cross the stage with a playful high-five as they pass. Even though Adams has rejigged the running order of the record – Summer Of ‘69 becomes the album’s boisterous finale – there’s no denying the unassailable staying power of Reckless./o:p

The second half of the show might have featured Adams’s other greatest hits – almost too many to count – but the night belonged to the enduring, chiming Reckless, welcomed in by thousands of swaying arms held high and calling it home./o:p