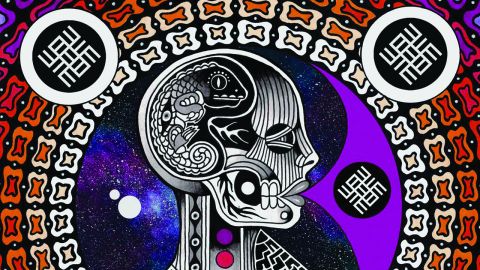 Vaguely reminiscent of Tool’s Lateralus, the colourful artwork for these Cardiff-based rockers’ first proper full-length is a good indication of how trippy the music is.

At their core, Lacertilia (the suborder of reptiles that lizards belong to) are a high-octane energy rock’n’roll band with a raucous lead singer.

But they’ve also injected a solid dose of psychedelia into their sound, not just as a means to drift motionless but to liberate them from mundane classic song structures, like back when Monster Magnet were a full-on space rock machine. We’re Inside… comes with a heavy concept about the human brain being a prison for the psyche – and while the 10 tracks here have a fair few open ends, not least the sitar-driven and raga-like intro and outro, they aren’t exactly freeflow jams either. Seven-minute opener The Wired And The Weird, for instance, rages one moment before reaching for the stars the next, and yet without ever losing the plot.