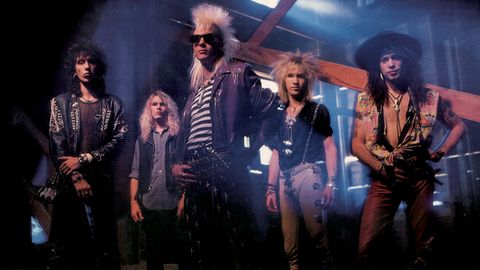 Almost all but forgotten, except among aficionados of LA’s 80s hair metal scene, Jetboy could have had a real shot at the top instead of being just a footnote.

Their ignominious fate was precipitated by their label Elektra dropping them just as their debut was about to hit the shelves in September 1987. It eventually appeared in late 1988 on MCA, but by that point, their old mates Guns N’ Roses had the world in the back pocket of their collective leather strides.

In reality, Feel The Shake probably wouldn’t have ignited the same degree of fervour as, say, Appetite For Destruction – the songs are well crafted and hooky, but what they lack is the ballsy attitude the band had live.

The title track has an irresistible, primal riff and Hometown Blues provides depth as the band pine for their home city of San Francisco, but elsewhere you get the tame cartoon rebellion of Make Some Noise and the rather polite pop-rock of Hard Climb.

Lewder, cruder and sleazier would have been much more fun – a situation rectified by the tougher-sounding second album Damned Nation in 1990. However, by that point Jetboy were out of fuel and they called it a day in 1993. The band reconvened in 2010, but that’s another story…