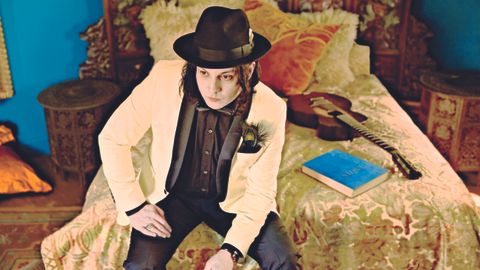 “The essence of all music to me is the blues,” Jack White declared in the first issue of this magazine. While his music draws on many genres – classic and garage rock, country, punk and indie – he has been a champion of the blues from the beginning, dedicating the White Stripes’ 1999 self-titled debut to Delta blues legend Son House. The White Stripes also recorded covers of songs by Blind Willie McTell and Robert Johnson, while White tackled Little Willie John’s I’m Shakin’ on his 2012 debut solo album Blunderbuss.

His label Third Man has issued the Paramount Records Wonder-Cabinet box set of early blues, jazz and gospel cuts. It is also reissuing the complete works of McTell, Charley Patton and the Mississippi Sheiks with blues label Document.

White’s eagerly awaited second solo album is a varied collection that retains the blues at its heart, thanks to his incendiary guitar playing and his lyrics – braggadocio mixed with loneliness and alienation, sitting firmly within the blues tradition.

His musical support on Lazaretto is split between two bands – the male Buzzards and female Peacocks – who also accompanied White on his 2012 tour to promote Blunderbuss and alternated backing him from gig to gig.

Thundering album opener, Three Women, displays the influence of McTell again, being based on his Three Women Blues, though musically it’s closer to early Led Zeppelin accompanied by a Hammond B3 organ, as White brags, ‘I got three women, red, blonde and brunette.’

Lazaretto’s title track is a thumping, jerky rocker with a funky bass line, a searing guitar solo from White and a section that features vintage synths creating arcade game bleeps followed by a fiddle solo. White almost raps the lyrics in a manner similar to his band The Dead Weather’s I Cut Like A Buffalo and its meshing of styles makes it one of the most experimental, noisiest tracks here.

After these Buzzards-backed rockers, White switches to an acoustic for the country-flavoured Temporary Ground, with The Peacocks adding pedal steel, fiddle, piano and backing vocals. It’s reminiscent of the excellent Van Lear Rose album White cut with Loretta Lynn and provides respite from the heavy riffing. Further highlights include the stomping but atmospheric instrumental High Ball Stepper, that meshes distorted blues guitar and Ennio Morricone-esque wordless female vocals; the boisterous Just One Drink that recalls Exile-era Stones and the piano-led Alone In My Home on which White sings, ‘I’m becoming a ghost, becoming a ghost, so nobody can know me.’

White claims his new songs were inspired by finding a box of notes he’d written as a 19-year-old. Though some songs initially appear to give us a glimpse into his psyche, he remains largely opaque, flipping between characters and playing with meanings.

Lazaretto is a hugely entertaining album that jumps through genres and lyrical perspectives (sometimes within one song), and references vintage blues, country and rock while still sounding entirely modern. This is brave, bold and compelling 21st-century blues.