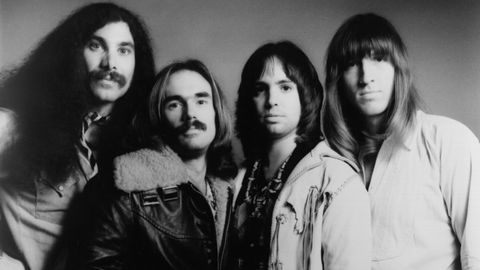 Ah, Iron Butterfly. Jimmy Page liked their name so much he called his outfit Led Zeppelin, and that’s about all they’re known for, right?

Far from it. This, their second album, was the sound of Summer ‘68 in the States. They were briefly perceived as more vital than Hendrix or The Doors. It sold a million within a year and has since passed thirty million - not bad for “forgotten” one-hit-wonders. On top of that, their crossover from flower-power and beads into heavier riff-based terrain caught the hippies-getting-darker zeitgeist and contributed to inventing the metal genre. They were both a part of the LA psychedelic scene with The Seeds and The Strawberry Alarm Clock, and somehow, on the 17-minute title track here, accidentally prog.

So it’s all about that title track?

Or Side 2, as it used to be. Truly it’s a thing of wonder, as a bass riff greatly indebted to Cream’s Sunshine Of Your Love - and pre-empting Geezer Butler’s trademarks - prowls in near-Gothic grandeur beneath Doug Ingle’s stentorian vocals, hit-and-miss guitars and a “strictly chickenshit” organ which Rolling Stone at the time claimed bored them to death. Then there’s the drum solo, which defies logic by being not boring at all. The whole piece shouldn’t hang together and make sense, but does.

Presumably Iron Butterfly laboured long and hard to get this classic recording just so?

Actually it was a studio sound-check on which they largely jammed and improvised, while waiting for their tardy producer to show up. By blind chance, the engineer was taping as a test. Even the title/refrain was a slurred, misheard mondegreen – for Adam and Eve’s backyard ("in the garden of Eden") – which stuck.

Do we even need to bother with the old Side 1 then?

They’re generally dismissed in the shadow of the Himalayan range that is In-A-Gadda…, yet those five three or four minute poppier songs stand up well today and are rather fun. Their acid-licked sunshine serves as a radiant counterbalance to their negative’s majestic gloom. Flowers And Beads and Are You Happy are content to have their own summer of love whether anyone else is playing along or not.

So this historic artefact now lurches back to life?

With bonus tracks including the under-three-minutes single edit of that 17-minute behemoth, surely one of the most ruthless cutting jobs of all time. (Strange but true: Boney M liked it so much they covered it in 1980, only to have their biggest flop.) And there’s a good package of notes, photos, etc. In 1976 this was the first album ever awarded platinum status. It may have been a freak, but it’s still a beautiful monster.