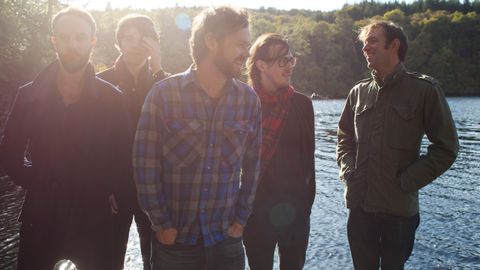 The arrival of Idlewild into the post-Britpop musical fray of the late 90s followed a strange time of music industry excess, the likes of which are never to be repeated – a period where bands with the right look, rhetoric, blouses and post-codes could find themselves being showered with money, drugs and, briefly, record contracts. But what goes up (noses) must come down, and when Idlewild – a band with neither the right look, rhetoric, blouses or post-codes – debuted in 1997 just weeks before Tony Blair came into power, their cantankerous, rudimentary racket of Sonic Youth-styled discordance and a Black Flag/Dinosaur-inspired velocity-over-melody approach was the very antithesis of Britpop’s mask of cheeriness; a mask which by then had slipped to reveal a tight-jawed grimace. Bands were discovering coke and smack and some A&R men were crippled by comedowns and breakdowns. Fool Britannia.

Enter Idlewild, who always had a depth, an inherent self-effacing literariness and a Calvinist work ethic that meant it unlikely that complacency and rock star parody would be their undoing. Their early Americanisms – singer Roddy Woomble’s mid-Atlantic lilt; a fondness for bands on labels such as SST and Dischord – actually served them well. Over six albums released in eleven years they matured from thrift-store punks to Caledonian alt-rock bards, but even the band would surely agree that by 2009’s Post Electric Blues things had become stale. Though not exactly Coldplay, their feet had nevertheless found the well-worn middle of the road.

How pleasing it is then to hear a return that not only feeds on all that made Idlewild great – crunchy riffs, folk melodies, choruses built for singing into the wind atop remote cairns over the crackle of a damp cagoule – but one which wanders off the map to explore new territories. This is a record giddy with the joy of music.

Opener Collect Yourself is a pure rock thrill in which the barbed guitars of Television are fed through a bank of pedals then injected with a hint of post-punk skank. Celtic grunge ska? No – that sounds hideous. It’s better than that. Because where once they emoted into their Converse, Idlewild have now learnt to strut. Who else but a liberated band unencumbered by commercial pressures would drop a wailing saxophone solo – as they do on Come On Ghost – and sound all the better for it?

Elsewhere Rod Jones’ squeezes all sorts of brilliantly skewed and skronky sounds from his guitar and Woomble (one of the finest lyricists of his era, it should be noted) now has a whiskey richness to a voice honed by a half decade on the folk circuit. Hammond organs add an occasional country flavour, but this is very much a guitar record. In fact, it merrily and quite casually widdles on most other contemporary British guitar bands from a great height. A songs such as (Use It) If You Can Use It for example is delivered with such wanton, freewheeling abandonment it’s impossible not to get swept along by Idlewild’s renewed energy. Returning bands take note: this is how you do it.