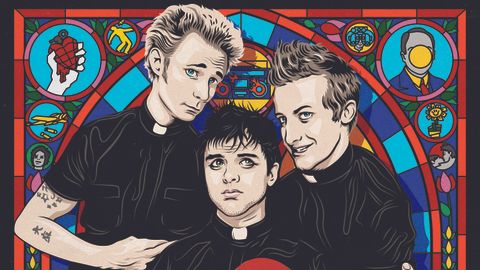 The arguments over what is and isn’t punk have raged for as long as the genre has existed. They might share a common ancestry, but Green Day bear as much resemblance to the politically charged, $8-a-show likes of Fugazi as a chihuahua does to a wolf. Green Day’s brand of punk has, from day one, harboured capitalist ambitions of fame and fortune, stadium shows and high-return royalty payments. And, fair play to them, they’ve succeeded to a degree that they themselves probably couldn’t have envisioned. This new ‘best of’ collection unveils the secret of their success in very simple terms: they’ve written some blinding songs in their time.

From the irresistible bouncing bass of early smash Longview, the sarcasm and snotty self-loathing of Basket Case – which defined Generation X ennui with laser precision – to the move towards more considered acoustic, string-laden pop with Good Riddance and the political and social fury of George W Bush-era American Idiot (ah, if only we had some inkling of the true horrors to come), they’ve soundtracked popular culture since breaking through with their major-label debut Dookie, the starting point of God’s Favourite Band’s tracklist, in 1994.

While it’s not all gold – Warning remains a dragging misstep that sticks out like a sore thumb among their greatest pop moments; and the ‘P’ word really is their greatest ally – they’ve never been afraid to celebrate the joys of pop, the fizzy highs of a singalong chorus, the communal joy of a concert that throws in everything including the T-shirt cannon. While grunge was busy pretending fame was a curse, Green Day were embracing it and moulding themselves into the ultimate gateway band for rock fans to come – that you can go to one of their gigs now and see two or three generations of the same family singing their hearts out is a truly wonderful thing. And this collection of their biggest hits is the perfect introduction to the pre-teen budding rocker in your life.

For those already familiar with the tracks on God’s Favourite Band (which is probably most of us), there’s the new Back In The USA, a rollicking, all-American anthem stuffed with harmonies and all set to soundtrack the next big teen drama, and a new version of then gentle, Americana-tinged Ordinary World, now transformed into a tear-jerking duet with country singer Miranda Lambert. But that’s just garnish. Really, God’s Favourite Band is about the hits, the whole hits and nothing but the hits.