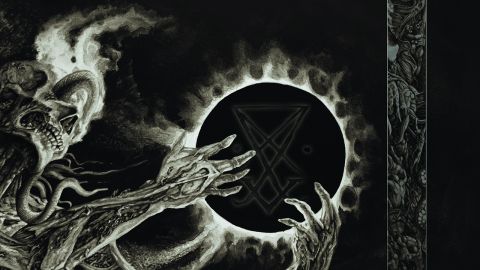 There’s a sense of something ominous that kickstarts the seventh album by this New Orleans blackened thrash quartet. It’s generated in simple fashion: drummer Zack Simmons playing a machine-gunning tribal pattern on his toms as producer Jarrett Pritchard fades it in to (un)intentionally create the feel of something – or things – rumbling towards and rapidly encroaching upon you with extreme menace. This leads into Forsaken, a track that exists as the result of the band’s knack for splicing atonal black metal with chord progressions from the worlds of classic rock and metal. This dichotomy between the cold, icy elements associated with black metal and more traditionally melodic and fist-banging fare is played out to such an extent on Vengeful Ascension that it becomes a noticeable thematic strain.

Under The Flesh, Into The Soul puts this dichotomy on display in its first handful of seconds with a riff (the chorus riff, it is eventually revealed) that bounces between the sounds of frostbitten Scandinavia and the musty garages of 80s middle America that had Sabbath and Priest worshippers discovering Manilla Road, Cirith Ungol, Omen and muscle cars. Chaos Arcane juts forth with the sort of precise and harried speed that had people originally referring to Slayer as black metal, while Decayed Omen Reborn stirs dissonant sludge into the mix. The title track filters a vintage, mid-paced Metallica chugger through late 80s/early 90s Midlands doom (i.e. Paradise Lost), with guitarist Sammy Duet expressively shredding while bassist James Harvey lays back in the pocket when necessary before confidently and tastefully strolling around the fretboard when given the opportunity. His contributions are especially potent on the eerie and pulsating Where The Sun Is Silent and Abandon Indoctrination, where he adds a fetching warmth to its rocket-paced, second-wave BM.

Vengeful Ascension is the most mature recording in the Goatwhore canon. Its combination of disparate subgenres from opposite ends of the structural and melodic continuum is masterful, resulting in a remarkably non-contrasting display of good and evil; that being good songs that sound as evil as all hell.