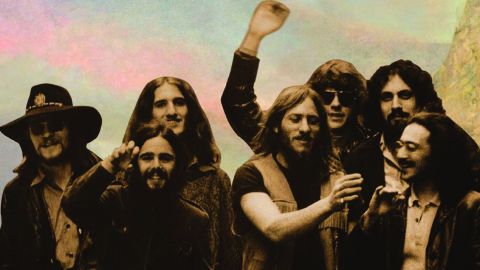 Emerging from Chicago into the heady, psychedelic avant-garde scene at the end of the 60s, The Flock were in thrall to Miles Davis’s Bitches Brew. The seven-piece line-up – centred on guitarist/singer Fred Glickstein and classical/jazz violinist Jerry Goodman – included two sax players and a trumpeter, and the opening track of their 1969 self-titled debut, called Introduction, has an alluring range of dynamics to draw you in.

They can switch styles at will, often within the same song. The key for the casual listener is their left-field cover of the The Kinks’ Tired Of Waiting. If you get it, then the swirling bursts of creativity and frequently surreal lyrics provide their own momentum.

But the sense that there’s more to come soon dissipates on their second album, Dinosaur Swamp, which is dense and bewildering. The ideas continue to flood in but there’s no quality control and the songs lack focus.

Goodman, whose playing is a compelling feature on the first album, is relegated to a peripheral role. Instead, there’s an increasing reliance on sound effects and production tricks. Not surprisingly Goodman was easily lured away to the Mahavishnu Orchestra.