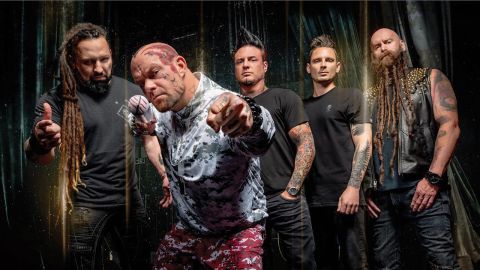 Even though they’re one of the most successful metal bands of the last decade, it feels like there’s a great deal riding on Five Finger Death Punch’s eighth record. With upheaval plaguing the guys over the last three or four years, and with the band seemingly plateauing in their quest for festival headlining status in the UK during that period, it’s no stretch to say that 5FDP need to come up with the goods on F8.

The opening title track certainly adds some grandeur to the usual bluster: an instrumental full of pomp and strings that leads into the first song proper, Inside Out. It’s here that you get a glimpse of what F8 is attempting to bring.

The production by long-time collaborator Kevin Churko feels thicker and harsher than usual, and the guitar riff is far more complex than the band’s typical MO. It also features a huge, skyscraper chorus from Ivan Moody, who, far more typically, switches between furious pitbull bark to melodic croon throughout.

It’s followed by the heavy Full Circle, with another juddering riff taking it to the higher echelons of 5FDP’s canon, and the more stadium rock-sounding Living The Dream. But it’s with next track, A Little Bit Off, where things start to get really interesting. With a sound that would fit perfectly at home on daytime Radio 1, it owes more to latter-day Kid Rock, One Republic or Californication-era Red Hot Chili Peppers.

It might stray a little too far if you’re a fan of their usual hostility, but, once the shock fades, it’s a hell of a catchy ditty that may open them up to an entirely new fanbase. 5FDP are clearly aware of what they’re doing, and are clever enough to follow it up with the raging Bottom Of The Top, featuring Ivan screaming ‘Is this heavy enough for you?’

It certainly is, with another excellent choppy guitar riff contrasting with some beautiful picked acoustic parts, and new drummer Charlie Engen doing some powerhouse work. The album’s best one-two punch comes in the form of Darkness Settles In, which beefs up some serious Springsteen vibes, oddly reminiscent of Metallica’s cover of Bob Seger’s Turn The Page, and the brutal This Is War.

It might be the heaviest song 5FDP have ever recorded; a spidery riff clearly influenced by recent roadmates Megadeth gives way to a savage groove that wouldn’t feel out of place on a Fear Factory record.

The second half of the record isn’t quite so jam-packed, and a bit of trimming would have improved F8 overall, but that doesn’t take away from the fact that when this is good, it’s as good as they’ve ever been.

Obviously, with 5FDP you pretty much know what you’re going to get, but the band deserve great credit for attempting to progress eight albums into their career. Their thirst for commercial expansion is clear, but they might just have made the best record of their career in the process.