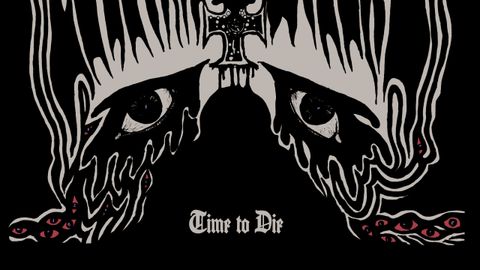 The act or process of resisting authority, control, or convention – rebellion, in other words – is something all of us have to consider at points in our lives.

Most will conform to a more convenient existence, but there are a select few who stay true to their hearts, that cannot be silent and sit still. Electric Wizard have maintained total artistic integrity since their formation in 1993, and it’s led to them becoming one of the most revered cult bands around – a British institution universally admired for their uncompromising vision of anarchy and disdain. Album number eight, Time To Die, sees them unshackled from Rise Above and threatening more mainstream channels through new imprint Witchfinder Records, under the commercial weight of major label Universal Music Group.

The trickling water and morbid funereal keys of opener Incense For The Damned wash into a black portal of nightmarish psychedelia, where acid concentrate drips down the walls and the word ‘die’ seems to echo for an eternity. Those downtuned riffs feel heavier than lead, caving your head in slow and hard enough for you to feel the life draining out with each blow. Cheery stuff as usual, then. Chief Wizard Jus Oborn’s voice echoes over the peaks like an ancient deity casting a repugnant spell, but this is no stab in the dark at esoteric ambitions; this is full-on lysergic necromancy. The title track is reminiscent of the bastardised blues Wizard unleashed on cult classic Dopethrone – distant rumbles from a secret basement of 70s analogue fuzz, vintage envelope filters and dusty delays that slowly consume the listener in a choking cloud of sticky green smoke. I Am Nothing is a Satanic siren for the teenage wasteland, ringing out to all the spaced-out miscreants and pill-shovelling parasites of the world: a call-to-arms for all those who are dead inside. But then the album as a whole screams pure contempt and misanthropy.

Time To Die also welcomes drummer Mark Greening back to the fold, and though this reunion was short-lived, his behind-the-beat cadence and lazy fills add further lethargy to Chris Fielding’s mix, where all instruments bleed into the red and teeter on the edge of melting your crackling speakers into a smoky mess. Funeral Of Your Mind picks up the pace with the sleazy grit of early Venom, though it doesn’t take long for the toxic exhaust pipes of feedback and white noises to once again warp the sands of time and eat through your ear canal into your contaminated brain. Album closer Saturn Dethroned comes full circle to the ethereality of where it all began, rounding off a 60-minute trip that will leave you trembing under the sheets in its aftermath. Electric Wizard belong to a select order who still practice what they preach and kill the old way. Long may that continue.

WHAT DOES THE ALBUM TITLE MEAN TO YOU?

“Firstly, it’s our judgement against the human race. We have overstepped the mark. Our justification for continued existence is looking pretty pathetic right now. The crime is life. The sentence is death. But we also felt it was our death. We were overwhelmed with negativity, initially from outside, then it got hold of us like a cancer.”

WHAT FRAME OF MIND WERE YOU IN WHEN YOU WROTE THESE SONGS?

“Bitter, vengeful, morbid , depressed – we felt we were up against it. Every day was a new legal letter or threat of being sued. So this LP is a big ‘fuck you’ to everyone who tried to stop us.”

WHO DID THE COVER ART AND WHAT DOES IT MEAN?

“I did it… it was the result of an extended narcotics binge. I wanted to obsess on Wizard iconography, a sort of baroque meditation, within the framework of death and rebirth. The butterfly is rebirth but also the ‘titanium butterfly’, which relates to the legend of the heaviest riff ever.”