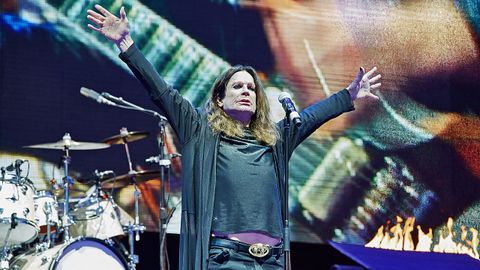 It’s only Friday afternoon and Download already looks like Beelzebub’s very own steaming piss moat. After a week of ominous rumbles, the heavens have finally opened, closely followed by the gates of Hell. For hours now, the weather gods of Valhalla have been literally jizzing down dirty great waterfalls of soul-drenching misery. Travellers to Donington, weary from train delays and long traffic jams, arrive to pitch their tents on a site already ankle deep in liquid mud. And so it will continue all weekend. Welcome to Drownload. Oh joy. Hail Satan.

But are we downhearted? Hell no. Because we came to Donington to raise our devil horns one last time to some living legends, including Black Sabbath’s final Download appearance, and raise a glass of the hard stuff to absent friends like Lemmy, who was booked to play here before inconveniently dying back in December. Indeed, this whole weekend feels like a tribute to the late Motörhead frontman, especially with the main stage now bearing his name. On Friday afternoon, a compilation of the great man’s past Download performances and interview clips plays as a homage on the big screen.

Henry Rollins also co-stars in Gutterdämmerung as a homicidal priest, appearing both on screen and live onstage at Download. After the screening, he reappears onstage to pay tribute to Lemmy. “If you knew his music, you knew him,” Rollins claims. “He was his music.” The film ends with a brief clip of the man himself, grinning lewdly and barking, “Fuck off!” at the camera. Remember him this way: the Rommel of rock, dressed as a Nazi general, swearing like a bastard.

The last time Rammstein played Download, three years ago, they turned all of Donington into a giant sex dungeon with an orgiastic Oktoberfest of weapons-grade pyrotechnics, simulated sodomy and foam-spurting penis cannons. It was truly one of the greatest perv‑rock spectacles I’ve ever witnessed, so expectations are naturally high for their Friday headline set this year.

Alas, despite an abundance of flamethrowers, bulging lederhosen and thunderous techno-metal riffs, these bawdy Berliners rein in their usual porno-fascistic Mad Max excess. Admittedly their brawny Herman Munster-faced singer Till Lindemann does finish the show suspended high above the stage in a pair of golden angel’s wing that burst into flames, but by Rammstein’s terms, this is all rather tastefully restrained. And good taste is not what we want from these cruel beastmasters of Wagnerian buggery.

Only a year since his last Download appearance as part of Mötley Crüe’s farewell extravaganza, Nikki Sixx returns on Saturday in more modest mode with his long-term side project Sixx:A.M. The bass-playing legend is generous onstage, ceding most of the limelight to his scorchingly nimble guitarist DJ Ashba and his boisterous frontman James Michael, who looks like Jim Carrey auditioning to play Billy Idol in a Barry Manilow wig. Pure bubblegum metal, but still a welcome blast of shallow Southern California positivity on a rain-sodden afternoon in Leicestershire.

Two hours later, Sixx returns for one of the weekend’s best guest appearances, joining Megadeth on their novelty punk-metal remake of Anarchy In The UK. Dave Mustaine’s thrash veterans have made some pedestrian Download appearances in recent years, but this time they sound energised and vital, ending with a tumescent rampage through Holy Wars.

Unlikely cover versions and unexpected cameos prove something of a theme across the weekend, most notably during Disturbed’s starry set. Besides his orchestral power-ballad reworking of Simon & Garfunkel’s spooked folk-pop standard The Sound Of Silence, David Draiman also duets with Halestorm singer Lzzy Hale on U2’s I Still Haven’t Found What I’m Looking For, Iron Maiden survivor Blaze Bayley on The Who’s Baba O’Riley, and Download virgin Benjamin Burnley of Breaking Benjamin on Rage Against The Machine’s Killing In The Name. It’s one step away from karaoke, of course, but it’s also an agreeable show of solidarity across different genres and generations.

But for sheer WTF chutzpah, the best duet of the weekend has got to be veteran eighties pop diva Kim Wilde’s three-song guest appearance with breakneck thrash veterans Lawnmower Deth, sportingly sharing vocals on their shredding piss‑take cover of her hit Kids In America. Maximum respect to all concerned.

Acts from the more experimental, multiracial, genre‑mashing fringes of hard rock seem less prominent this year than at previous Downloads, so it’s heartening to witness Skindred tearing up the Encore stage with their rousing jump-along collisions of heavy guitars, hip-hop beats, reggae vocals and crowd-baiting Welsh humour. Another revelation is New Jersey’s Ho9o99, whose exhilarating shotgun blast of ragged punky hardcore invokes Bad Brains in their prime, and features a Hendrix-style flamethrower torching of The Star-Spangled Banner buried in the sonic chaos. Fantastic.

For fans of heavy music’s more progressive wing, it’s also inspiring to see California’s Deftones so high on the bill on Saturday, playing against a giant blow-up of the pink flamingo sleeve from Gore, their finest album in years. They may be alt.metal veterans with eight albums behind them, but Chino Moreno’s gang still sound like they’re pushing the envelope with their elasticated beats, twisted electronics and foghorn blasts of ambient noise. Download is a great showcase for traditional hard rock, but there’s always room for a few more adventurous outliers like Deftones.

The bells, the bells! Black Sabbath arrive on Saturday night to tolling chimes, spooky clangs and diabolically dissonant chord changes. Totally old school, simple but powerful. With the clock now counting down on the final act of their half-century career, the reunited founding fathers of heavy metal take us back to an era before the term even existed. Their vintage setlist is almost entirely culled from their first three classic albums, and is a striking reminder of how their nascent sound was born from a maelstrom of jazz, blues, funk and prog elements. From the raw physicality of Snowblind to the psyched-out sensory assault of Behind The Wall Of Sleep and the martial wallop of Iron Man, these immortal stone tablets of rock anthems have retained their potent early-seventies aura of occult alchemy and druggy psychosis.

Barely a decade ago, Ozzy Osbourne and Tony Iommi were battling each other in court over the Sabbath name. Onstage at Download, the black-cloaked Prince of Darkness literally bows down as he introduces his long-time musical sparring partner. Ozzy may be a little doddery and off-key at times, but he defies his clownish media image by commanding the stage, orchestrating mass singalongs and demanding loud cheers from the crowd. The single minor disappointment of this show is a rushed gallop through Paranoid, bashed out with the curfew looming and a fleet of purring black Mercedes lined up backstage, ready to smooth Sabbath’s exit.

Even after decades of bad blood and Spinal Tap spoofery, there remains something primal and elemental about Sabbath’s seminal music that transcends parody. Their autumnal reunion has been shadowed by genuinely dark forces, including Iommi’s treatment for cancer, but their ancient alchemy sounds as potent as ever at Download. If this truly is the final chapter for the Beatles of metal, at least they’re closing the story on grand form.

This year’s mud-caked Download wins no prizes for glamour and magic, but at least Jane’s Addiction bring a much-needed whiff of bohemian bacchanal to the sodden Sunday. Sporting a dapper pimp suit and Panama hat, Perry Farrell slips effortlessly into jive-talking peacock dandy mode, slinking and smooching to the syncopated shimmers of Mountain Song, the funky blast of Been Caught Stealing and the softy cascading reverie of Jane Says. Their straight cover of Bowie’s Rebel Rebel is a nice touch, respectful if a little too respectable. For most of this show, a troupe of young dancers grind lasciviously on a raised stage, or swing on harnesses above Farrell and Dave Navarro. But they’re clearly not being paid enough as they can barely afford to buy any clothes.

Half-naked dancers aside, female performers are once again under‑represented at Download. But there are a few standout women across the testosterone-drenched sausage-fest. Halestorm boast one, with Lzzy Hale taking no prisoners, channelling the spirit of Joan Jett in her leather trousers and sequinned stiletto heels: “When I say scream, you fucking scream!” she commands. Meekly, we comply.

Hollywood screen star Juliette Lewis also serves up an electrifying hot mess with her ragged garage-rock band The Licks, flinging herself around the stage like a triple-jointed sex python. Lewis may not have a strong voice, but she has swagger and attitude to spare. At the least, she and Hale prove the old adage that women do cock-rock so much better than men.

But the most prominent billing for a female performer at Download is that of Nightwish singer Floor Jansen, a turbo-tonsilled Valkyrie of heaving bosom and hobbit-crushing thighs. These Nordic metal symphomaniacs rise to the challenge of their high-profile main stage slot on Sunday with an eye-popping goblin-metal spectacle so gloriously Scandinavian it virtually has antlers. Of course, Finland’s most successful musical export are easy to mock for their operatic bombast, but in truth they simply take the outlandish pageantry at the heart of most metal and amplify it by a degree or two. The result is essentially Game Of Thrones: The Musical, preposterous and awesome in equal measure.

Sunday night at Download climaxes with a double whammy of NWOBHM stalwarts, Saxon and Iron Maiden. Of course, Biff Byford’s grizzled old Yorkshiremen play one of the smaller stages, but their set arguably has more punch and grit than the main headliners. Saxon’s most recent album Battering Ram is well represented, but the loudest cheers are reserved for old-skool classics like Heavy Metal Thunder, 747 (Strangers In The Night) and Wheels Of Steel, which still retain the kind of jagged punky attack their former contemporaries Maiden have long since abandoned.

Currently criss-crossing the globe on their epic Book Of Souls world tour, Iron Maiden fly into Donington on Ed Force One with Bruce Dickinson at the controls. Mixing cuts from the new album with a smattering of classics, their marathon two-hour headline set on Sunday night is high on energy but low on surprises.

Initially dressed down in non-metal leisurewear, Dickinson has a pageant of costumes for later tracks like The Trooper and Fear Of The Dark, tirelessly raiding the dressing-up box of history like a Brit-metal Mr Benn. The singer is also on typically droll form in his onstage banter. “I looked down and there’s my fucking manager texting in the middle of the last song!” he splutters. “What a c**t!”

Maiden’s military-style operation is never less than impressive, but businesslike festival shows like this can feel more like quantity than quality. That said, the finale is worth the wait, featuring mighty versions of The Number Of The Beast and Wasted Years. Respect to Dickinson too for dedicating Blood Brothers to the victims of the Orlando gay club massacre just hours after it happened.

A vintage line-up but not quite a vintage year, Download 2016 is ultimately as much a victory for heavy weather as for heavy rock. Among the headliners, Black Sabbath take the main prize, but Lemmy’s absence also looms large over proceedings. As the unrelenting deluge continues well into Sunday night, I think I even catch a glimpse of the warty old goat up there in Valhalla, cackling like a maniac as he pisses great Biblical torrents down onto all of us below.