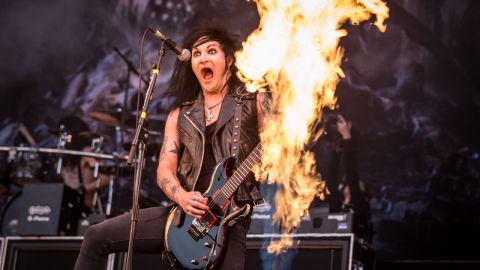 The church bells toll as Black Veil Brides step up to a massively populated Zippo Stage arena. The Hollywood quintet – whose stage set is adorned with ramps and an impressive wall of Marshall cabs – kick off their set with ‘Faithless’, a track taken from their self-titled 2014 album. It’s accompanied by bursts of flame which can be felt by those in the first few rows. Grandiose and overblown it may be, but sometimes that’s exactly needed in rock music.

The theatrics continue on Heart of Fire as guitarists Jinxx and Jake Pitts solo back-to-back as frontman Andy Biersack prowls the stage in a pair of short dungarees last seen hanging from the shoulders of Nikki Sixx on Mötley Crüe’s 1989 world tour.

The reaction to the live debut of Crown of Thorns shows that the band can seemingly do no wrong as the audience follow Biersack’s lead, word for word. Similarly, The Legacy – from their 2011 album Set The World On Fire – is a massive crowd pleaser.

Biersack thanks the crowd, and gives a shout out to tomorrow night’s headliners – and childhood heroes – Kiss before the band lead into Fallen Angels and In The End. These songs are punctuated with enough pyro that could potentially dry out the muddy swamp surrounding the stage.

Despite the fact that the legendary Faith No More are playing the Main Stage a few hundred metres way, the crowd gathered for Black Veil Brides in the most miserable of weather hints that they have the pulling power to return to Download at an even higher spot on the bill. Don’t bet against it.