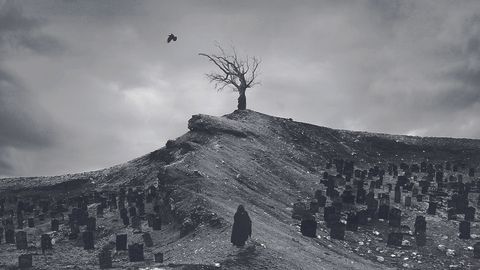 After two sensational EPs, despondent American trio Deathwhite are finally set to crush both skulls and expectations with their long-anticipated full-length debut. As nihilistic as its title, For A Black Tomorrow is a chunk of gothic doom that bridges crushing melodies with haunting, acoustic atmospherics. Clean guitars often give way to harrowing harmonics, providing a dark dance beneath the grim yet operatic delivery of the nameless lead singer. This interplay becomes For A Black Tomorrow’s bread and butter, established from its opening as The Grace Of The Dark’s tranquil verses juxtapose an ominously hummed pre-chorus. Contrition remains strong after a rhythmic start before hitting a zenith with the album’s crescendo of a title track. Armed with a lugging riff that builds to an extended solo and climactic refrain, it’s the perfect footnote for this promising slab of heaviness