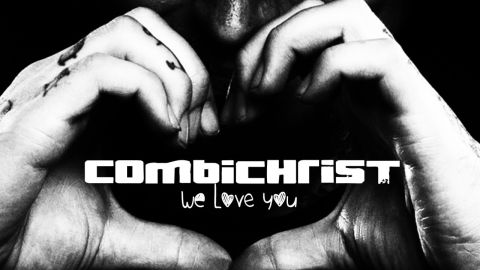 “We were made to love you but our only hope to save you is to terminate you,” ominously declares the cyborg voice that initiates Combichrist’s sixth record proper, almost as if we’re getting strapped down and bunged off to Switzerland on a plane full of drooling pensioners and glassy-eyed grannies.

The Norwegian quintet have made the marriage of man and machine their raison d’être for over a decade now, splicing the primordial fury of thunderbolt riffs against the cold indifference of a bleepy binary dystopia. Every Day Is War sits somewhere in between Skinny Puppy, Rammstein and early NIN just before Can’t Control teleports you to an illegal backstreet rave that stinks of blood, sweat and cheap whizz.

By the time Satan’s Propaganda drops, you can almost see yourself gurning away in a dark corner, having borrowed a neon orange whistle off some stranger called Otto. In a good way, of course.

Industrial, rave, aggrotech, hellektro… whatever you want to call it – the mêlée of spiky guitars, punishing techno beats and supersaw synths makes We Love You tickle in all the right (and wrong) places.