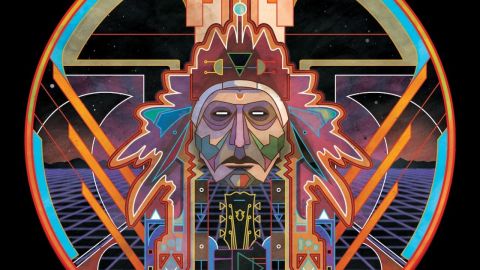 Few bands are able to unite the ever-growing and ever-warring tribes within the metal world, forever restless in their quest to find a new subgenre and haircut to sneer at, but the unstoppable rock force that is Clutch seems to be something that permeates and resonates through every crack of our culture. The Maryland quartet are just about as musically universal as an artist of the modern age can get, and it really doesn’t matter where you come from – we all speak their language.

After two very solid, although somewhat less immediate records (2007’s From Beale Street To Oblivion and 2009’s Strange Cousins From The West), the quartet have interestingly chosen to return to producer extraordinaire Machine, who last worked with them almost a decade ago on fan-favourite Blast Tyrant.

The opening title track is undeniably supercharged, a balls-to-the-wall anthem purpose built for lengthy truck rides, weekend carpentry, ale brewing, beard championships… and pretty much everything in between. Something’s clearly flipped their switch, and if you’re particularly fond of their no-nonsense, hook-laden bulldozers like The Mob Goes Wild, this will very quickly become one of your favourite Clutch songs. Crucial Velocity lives up to its name, being the perfect soundtrack to break the speed limit with your head stuck out of the window, before Mr Freedom reminds us exactly how catchy Clutch choruses can be.

Frontman Neil Fallon is up to his usual tricks, spitting and breathing self-affirmation, preaching like he’s the last of his kind over a super-abundance of wah-drenched blues coming out of Tim Sult’s amp. ‘I’m a warmonger baby, I got blood in my eyes and I’m looking at you,’ he cries in between the hoedown harmonica bends that sit above the vacillating shuffles of D.C. Sound Attack – a thick, slick beast of rock Armageddon.

At the very heart of the band, foundations laid by drummer Jean-Paul Gaster eclipse any notion that drummers are there to simply keep time. In fact, the juggernaut grooves and blink-and-you’ll-miss-it time shifts in songs like Cyborg Bette and Oh, Isabella add as much colour as the riffs themselves, proving exactly why he is one of the finest drummers you’ll read about in these pages.

This collection of 11 songs feels punchier than the Clutch we’ve grown to know in years most recent: recapturing the energy of the Pure Rock Fury, Blast Tyrant and Robot Hive/Exodus stretch of their career, with the lack of restraint and breathing space making for a much more impactful and hard-hitting listen. Unto The Breach could be one of the heaviest songs Clutch have written since their embryonic years as an angrier hardcore outfit, while Book, Saddle, & Go explores the more traditional stoner/space rock genetics.

There’s something so undiluted, so electric and so goddamn human about the music that comes out when these four men stand in the same room together – the honesty of a true working man’s band doing what they do best: capturing the magical spirit of rock in its most natural form.