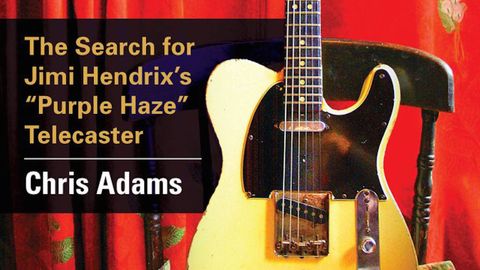 Most searches involve some kind of metaphysical aspect. Not this one. Author Chris Adams is in possession of an old Fender Telecaster he believes was once owned by the great man himself and – through a largely internet-based search – attempts to prove provenance in order, presumably, to make a few quid.

Which is ironic considering that, according to Adams, it was financial woes brought on by (bad) management which forced drummer Mitch Mitchell to sell off the band’s gear in the first place. It’s a depressing tale all round, although Adams’ own reminiscences – he fronted 70s folk rockers String Driven Thing – provide light relief amidst the endless analysis of scratchplates and serial numbers.

The retelling of Hendrix’s tragic story also throws up the odd interesting titbit – notably the fact Mitchell was hired on the toss of a coin by Chas Chandler. However, anyone hoping for a light-hearted romp about a lost totem from the Aquarian age – a literary equivalent of Tenacious D In The Pick Of Destiny – should steer well clear.