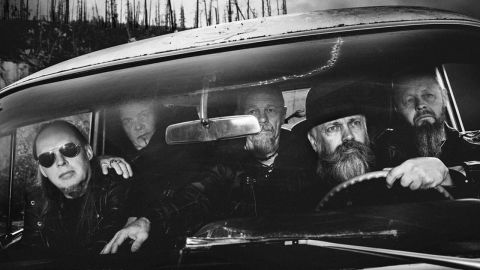 The Door To Doom tracklisting

If you give even the remotest toss about doom metal, the news that Johan Längqvist has returned to Candlemass after a 32-year gap should have made you do whatever the doom equivalent of a happy dance might be. A forlorn foxtrot, perhaps?

Having sung on the Swedish legends’ seminal debut, Epicus Doomicus Metallicus, back in 1986, Längqvist could easily have stayed in the shadows and not risked a potentially perilous sequel. But class is, as they say, eternal, and The Door To Doom not only reveals that founder, bassist and chief songwriter Leif Edling is back to top form as a riff-writer, but also that Längqvist’s voice remains his ultimate foil. It sounds, somewhat incredibly, as if he’s never been away.

Never a band to mess with a frankly shit-hot formula, Candlemass begin their 12th album with Splendor Demon Majesty, immediately ticking an important box by kicking off with a lumbering, Sabbathian riff of incalculable hugeness. It all feels like business as usual until Längqvist arrives, backed by some eerie vocal harmonies and underpinned by an ensemble performance that feels exuberant, aggressive and humming with urgency. His voice has weathered brilliantly, the dulcet rasp of old classics such as Solitude reborn with added grit and oomph.

But what really seals the deal is how Edling has conjured songs that perfectly showcase this renewed meeting of creative brains. From the hold-on-to-your-heads explosiveness of that opening track onwards, The Door To Doom proves to be a straightforward masterclass in how to do doom metal properly. And just in case you have any residual doubts, the moment when Tony Iommi himself pops up midway through the superbly named Astorolus – The Great Octopus and lets rip with a solo of life-affirming brilliance will have you howling for more. As grimly dark and monstrously heavy as this album is, Längqvist has the time of his life throughout, and so will you.