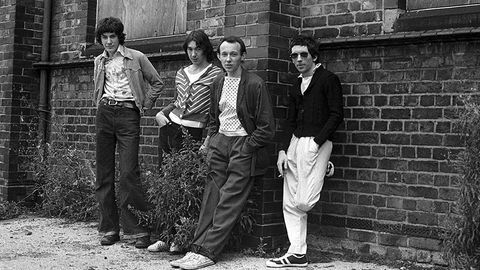 In a world of identikit Green Day trios and Mohican-sporting buffoons, it’s interesting to remember just how different the original punk bands were. From The Stranglers’ pub-Doors routines to the Banshees’ pre-goth wails, from the Sex Pistols fusion of the Stooges and the Faces to The Clash’s mixture of Mott riffs and bass-free reggae, early punk wasn’t just the Ramones with Cockney accents. And arguably the most original of the first punk wave were Buzzcocks (there’s no definite article because, according to Pete Shelley, Buzzcocks are the definite article).

Formed in Manchester in 1976, effectively to support the Pistols (a band who Shelley and original singer Howard Devoto had booked to play the Lesser Free Trade Hall), Buzzcocks may have been fans of Iggy and the Sex Pistols but they brought other influences: Shelley’s krautrocking guitar, Devoto’s literary punk lyrics, and a combination – even at the start – of pop brilliance and romantic cynicism.

Buzzcocks’ first line-up split before they could record an album (Buzzcocks II became Top Of The Pops regulars, Devoto formed the equally influential Magazine), but they recorded the first truly independent 45, the Spiral Scratch EP, and a series of demos, some of which would be polished to a silver sheen on the superb Another Music In A Different Kitchen. Both Spiral Scratch and the demos (long available on bootleg as Time’s Up) have been rounded up for official release by Domino on one album.

Time’s Up remains a largely very good collection. The majority of material is, unsurprisingly, pretty rough, but early versions of Shelley/Devoto songs such as Love Battery and Orgasm Addict suggest a band who are intelligent, sexual and aggressive. There are effective garage covers (The Troggs’ I Can’t Control Myself, Captain Beefheart’s I Love You You Big Dummy, later reworked by Magazine), and there are alternative versions of Spiral Scratch songs. Most of these songs would be done better later by both Shelley and Devoto, but it all works and it’s great to have.

More effective – shorter, sharper and produced by Martin Hannett – is the Spiral Scratch EP. Four songs that sounded nothing like Sham 69 or The Jam, having the snap of T.Rex and the wit of Sparks, uncomfortable, catchy and like brain drills, three of the songs – Friends Of Mine, Breakdown, Time’s Up – still sound like nothing else, while one, Boredom, is still the funniest and sharpest song of its era. The whole album is worth owning for that song alone.