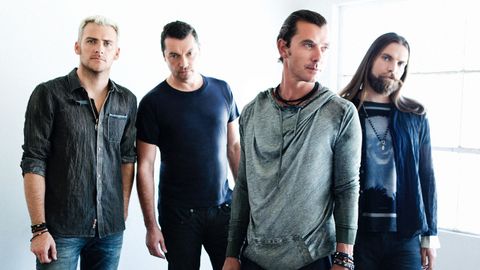 Leafing through Bush’s UK press cuttings is enough to make you wince. Back in the mid-90s, the alt.rockers were that rarest of beasts: a British band embraced by America (to the tune of 20 million album sales), but critically eviscerated on home turf, where the earnest angst of singles like Swallowed jarred with the goonish knees-up of the Britrock movement. “We were a very weird story,” frontman Gavin Rossdale told this writer, “because everyone was so pissed off at our success. We got paid back by being slaughtered by the music press.”

Two decades later, Black And White Rainbows is likewise accompanied by the sound of knives on whetstones. Clearly, Rossdale’s recent appointment to ITV talent show The Voice UK isn’t going to endear him to anyone reading this, and will presumably shuck a little more vitriol over reviews for this seventh album. But do the world’s most hatchet-jobbed band warrant another round of flagellation?

The early signs suggest that Bush deserve re-evaluation. Opener and lead single Mad Love blossoms from a glowering verse into a peach of a chorus, establishing the album’s template as widescreen, electro-tinged pop-rock, pitched somewhere between U2 and Thirty Seconds To Mars.

A spring-heeled, Feeder-esque guitar riff brings in Peace-S: another strong moment, and evidence that when Bush bring the hooks, everything works just fine.

Frustratingly, they run out of juice. The trip-hoppy Water is the first in an almost unbroken run of tracks for which life is too short. Lost In You is pretty but slight. The blustery Sky Turns Day Glo is chiefly memorable for its risible calls for environmental awareness (‘The polar bears are weeping’). The talkbox guitars of Toma Mi Corazón and the rousing All The Worlds Within You briefly pick up the pace, before the churning Nurse tops up the sedative.

The album lumbers to its conclusion, with the downbeat Nothing But A Car Chase and People At War’s morose synthpop. ‘I’m clinically blue,’ moans Rossdale on The Edge Of Love. If he’s struggling to get through this, what hope have we got?

Bush are far from the abomination of media repute, but Black And White Rainbows won’t convert the long-term haters, and seems too torpid to mobilise a fresh generation of fans. To use a Voice analogy, there are moments when your hand hovers over the red button, but there’s never quite enough to make you spin the chair.