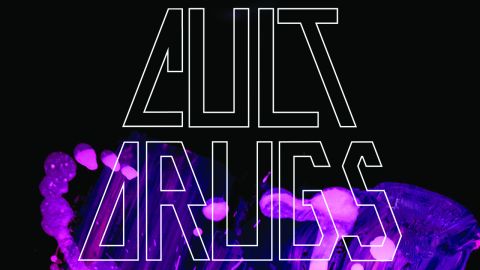 For almost a decade now, Norway’s Blood Command have been churning out ballsy, genre-dashing rock and getting not nearly enough credit for it. Yet, if there’s any justice in this lawless land we call metal, with the release of the band’s third album that should all be set to change.

Hailing from Bergen, a city notorious for its black metal scene, the quartet have eschewed their hometown’s darker fixations. Instead they’ve focused on cooking up their own brainy, eye-popping blend of post-hardcore, power pop-punk and dancefloor punk’n’roll; coined ‘deathpop’ by leader, guitarist and producer Yngve Andersen. Five long years have passed since the band’s brilliant Funeral Beach. Furthermore, it’s been three years since they announced the departure of frontwoman Silje Tombre and the arrival of new scream queen Karina Ljone. As though tapping into the frustration of that delay, Cult Drugs kicks off accordingly with the sublimely structured CTRL+ART+DEL, building as relentlessly as a tension headache on a barrage of drums, festival tent anthemia and Karina’s rabid shrieks… but just when you think it’s going to explode, a disco chorus emerges from the carnage. Up next, the title track rides in on the itchiest guitar rhythm imaginable, melding groovy bass, stabs of synth and jagged riffs that simultaneously manage to recall New Order and At The Drive-In. Nervous Laughter, Gang Signs and Initiation Tape #1 are the band at their most hooky and memorable, bashing together the tangled unruliness of Kvelertak, Paramore’s youthful fizz and spiky hardcore à la Refused between sizzling adrenaline, chirpy horns and twisted synths. None of these tracks sound alike, none of it should work and yet a breathless, invigorating energy glues it all steadfastly together.

While the band clearly revel in genre-busting invention, a searing post-hardcore heart simmers at the core of Cult Drugs amidst scorching drums, tumultuous waves and neon melodies. And as the album progresses, their more visceral tendencies begin to boil over. White Skin Tanned _:_: Teeth maintains the cutthroat sensibilities of their early EPs and The Secret Impresses No One ties itself in cortex-lacerating knots. You Can’t Sit With Us doesn’t remotely fuck about, white-hot guitars racing to keep pace with Karina as she segues frantically between playful mode and raw-throated catharsis as easily as a binge-drinker mixing spirits on a Saturday night. However, it’s album closer, (The World Covered In) Purple Shroud, that proves, over six batshit minutes of mariachi brass, choppy electronics, chest-collapsing riffs and frenzied melodies, that Blood Command are just as comfortable smearing their weirdness over longer distances as they are on shorter, more energetic bursts. It’s that combination of blind rage, catchy-as-hell songwriting and the Norwegians’ ability to balance the sweet and acidic while pulling massive, unpredictable choruses from seemingly nowhere that makes them such a gripping proposition. As a result, Cult Drugs is a fractious beast that refuses to be tamed, and probably the most fun album you’ll hear all year.