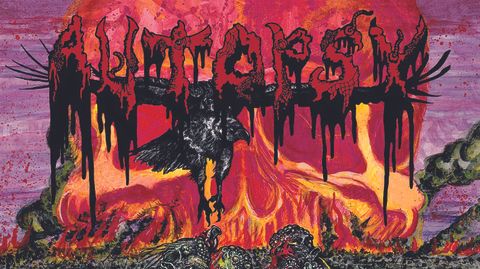 Disregarding a 1995-2008 hiatus, Autopsy have now been around for 30 fucking years! That’s a long time by anyone’s standards, even longer when a record like 1995’s Shitfun detracts from storied classics 1989’s Severed Survival and 1991’s Mental Funeral. Puncturing The Grotesque doesn’t so much reinvent the wheel as keep it turning with seven solid additions to the Bay Area bashers’ punishing collection of punk-infused, caveman death metal, resplendent with lengthy bursts of screaming solos. The title track and The Sick Get Sicker are indicative of these elements, with the latter summoning Black Flag’s Rise Above and forcing it into the throat of the mix. When the quartet slow the pace, a sidewinding air predominates. Gas Mask Lust teeters towards Voivod-gone-doom and Corpses At War recalls an infantry of Bolt Thrower’s tanks rumbling over the hills, sideways. Gorecrow is most reminiscent of the Autopsy of old as thick guitars bounce tempo and time changes off the walls and the cover of Bloodbath’s Fuck You is as fun and Dwarves-inspired as its title hints at with the mini-LP demonstrating the band’s capability at updating the sound and style that got them here in the first place.