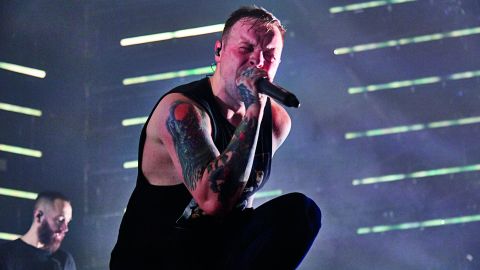 It’s 7pm and a never-ending queue is snaking around London’s Alexandra Palace – a river of black t-shirts and snapbacks shivering in the bitter British air… or it could be the gallons of adrenaline pumping around everyone’s bodies. This has been a long time coming. For years, tonight’s headliners have been pinpointed as the top dogs in the UK metal scene, and on this brisk Saturday they solidify their stature.

Once inside the cavernous venue, the crowd splits to dash in two directions. Half to the front, half to the bar, because what is a celebration without booze? But before the men of the hour take their place in front of a buzzing, overexcited sellout crowd, it’s up to COUNTERPARTS [6] to stir things up a bit. And in fairness, it’s a thankless task. As openminded and eclectic as this audience might be, they didn’t come here for some aggro hardcore. The Canadian bruisers dole out the super-heavyweight chugs and obnoxious breakdowns, as pits slowly, warily start to form, reluctant to expel too much energy before the big guns roll out in an hour or so’s time. As vocalist Brendan Murphy points out, Counterparts are friends of Sam Carter, making it here after a quick phone conversation, but for a band that try to slam through walls, they’re a little wide of the mark tonight.

The same cannot be said for WHILE SHE SLEEPS [8]. It’s been something of a rollercoaster for the Sheffield crew over the years, having recently opted to go independent for their third album, which sadly wasn’t toured as heavily around the UK as many may had hoped. But they still know how to bulldoze rooms in a matter of seconds. Opening on a cacophonous You Are We, Sleeps are on a mission to fuck everybody up, ripping and roaring through Brainwashed, Seven Hills and Hurricane, as bodies are flung over shoulders and into the floor, but it’s the deliriously anthemic Silence Speaks (sans Oli Sykes tonight) that ruptures guts and shreds vocal cords for that chorus. Sadly only afforded a 40-minute set time, WSS leave us gagging for more, but there’s something monstrous and magnificent lurking in the shadows.

Put simply, this is one of the best ARCHITECTS [10] shows we’ve ever seen. They’ve been touring Europe for weeks and it all culminates here, on home turf, in front of thousands of fans, friends and family. They’re treated like heroes, and justifiably so. Having faced a tragedy that no band ever should, they have found the strength to continue, for their fallen brother Tom Searle, and for their legion of followers around the planet. This is more than a gig. This is about community, spirit and love; this a celebration of triumph for a band that spent years toiling in the toilet circuit without anyone giving a crap, and now they’re ending a headline tour at the iconic Ally Pally.

With seven albums in the bank, the set is a smorgasbord of savagery and technicality, hammering out Alpha Omega, Downfall and a vicious Gravedigger. You haven’t known true joy until you’ve heard 10,000 people scream “Bleh!” at once. With screens set up either side of the stage, you can see just how much this means to the guys onstage, with wide-eyed smiles beaming out over our heads, as London bellows back every last damn word. Architects are more than just a band – just ask the lad who proposed to his girlfriend during A Match Made In Heaven – and tonight is arguably a moment in time that should have come years ago, but it’s more than deserved. We all remember the UK scene in mid-00s with bands like Midasuno, Send More Paramedics, Flood Of Red, and countless others who never got the break and faded into obscurity, but Architects kept going, they kept touring, they kept honing their craft and writing some of the most vital, forward-thinking metal to ever come out of these isles. This is proof that the system works if you’re good enough and if people believe in you – and we believe in Architects.

Before the inevitable encore, the band deliver a blistering and heart-wrenching Doomsday, written by Dan Searle for his brother Tom, filling the air with a deafening chorus. But the closer of Gone With The Wind is enough to break everyone. Full-grown men are weeping, arm in arm with their best friends, groups of friends and strangers alike all hugging and singing along, faces drenched in a mix of sweat and tears, because we know what this means and we know what Architects have been through. And as the simple image of a heart with the initials T and S shines out at the climax, you know that somewhere, somehow, Tom knows just how much arse his band kicked tonight.