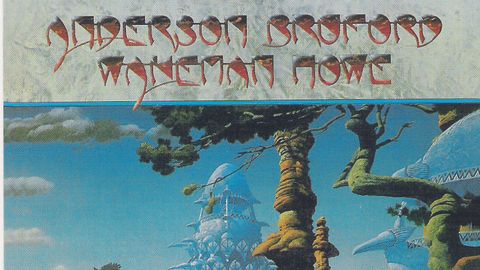 If Jon Anderson had prevailed, it could have emerged under the name The Affirmative. If the more waggish members of the ensemble had had their way, it could even have been attributed to No.

Pragmatically, this 1989 album from the version of Yes that wasn’t technically Yes came out under its members’ surnames, and provided another confusing chapter to the biography of the band that has rarely followed linear logic, either in its constitution or its sound.

At the time, the brand name was owned by Anderson, Squire and White. The latter pair were quite happy working with Trevor Rabin as key writer; Anderson less so. He preferred Yesmusic to stretch out, not compress. Reuniting with three other names who qualified as bona fide Yes men appealed to him. Bruford mooted King Crimson friend Tony Levin for bass.

Legalities, however, meant they couldn’t even bill live shows as featuring ‘Yes music’ without the other faction suing. The craziness calmed down when differences were resolved – under record company pressure – for 1991’s_ Union_, wherein both chapters of the clan were shoehorned together on one Frankenstein’s monster of an album. Naturally, that harmony was short-lived…

So how does the album – now repackaged in a Roger Dean box – stand up? Is it the ‘Yes by any other name’ album it’s generally documented as, or a maverick side-project? On the surface it’s exactly the riposte to the other group’s slick power-plays Anderson hoped for. His cosmos-high voice chirrups about inner and outer space, Wakeman constructs layered edifices of synth, Bruford uses his return to the fold to eschew the obvious and Howe adapts his lead work to the production techniques of the time. The elements are there.

So does it take off? Sometimes, but not always.

It is – inevitably – the longer ‘suites’ on which they flourish. Brother Of Mine, Birthright, Teakbois and Order Of The Universe give everyone enough space to exorcise any frustrations at being marginalised/excluded, and reach kingdoms the Big Generator crew had abdicated. On Quartet, Anderson sees fit to – either mischievously or innocently – quote Long Distance Runaround, Roundabout and other Yes staples. Shorter numbers such as Fist Of Fire sound closer in spirit to Jon & Vangelis’ State Of Independence, but in a healthy, probing way. Co-producer (with Anderson) Chris Kimsey prefers the solid to the fluid, but AWBH still soars, liberated, when it shakes its shackles. It’s Yes alright, in a parallel dimension.