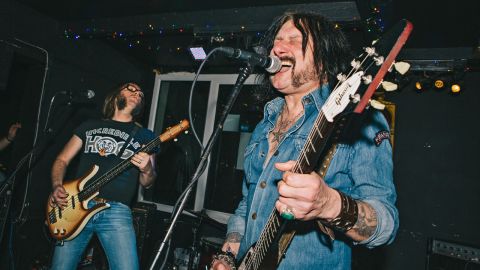 Whatever happened to the people we used to be?

It’s the kind of question you ask yourself watching ASCS. Because the years may come and go, but for these indomitable Hastings’ hairies, it’s eternally 1973.

Ambling on stage, frontman Johnny Gorilla and bassist Louis Comfort-Wiggett haven’t just got the look (denim, flares, mutton-chop sideboards) and the sound (Budgie meets Sir Lord Baltimore), they even smell like they’ve come straight from an all‑nighter at Hawkwind’s Ladbroke Grove squat. “Sorry, I just farted,” declares Wiggett prior to the pulverizing pub-metal of Paid In Full, and such cheeky (im)propriety has helped ASCS build a loyal following since 2012 debut Don’t Hear It… Fear it!.

Tonight, bolstered by a sledgehammer backbeat provided by new Aussie drummer Serra Petale, they exude a renewed sense of purpose. Anthemic single Elementary Man is dispensed with early doors, while a Slade-tastic U Got Wot I Need is both grungier and groovier than the version on last year’s Keep It Greasy. “The devil usually shows up when we play this one,” Gorilla growls before new single Nightmare, teeing up a demonic finale of The Thicker The Better, which sparks a shameless display of heads-down, no-nonsense boogieing from the faithful.

On this form, in five years’ time they’ll be selling Shovell wigs in Woolworth’s. Catch ’em while they’re still greasy.