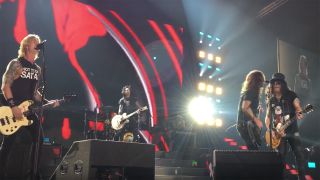 Foo Fighters and Guns N’ Roses have teamed up for a cover of GN’R’s Appetite For Destruction classic It’s So Easy.

It’s not the first time the two bands have united onstage. In November 2017, Guns N’ Roses were joined by Dave Grohl for a version of Paradise City in Tulsa, Oklahoma. Grohl “just happened to be in the neighbourhood,” according to Rose.

Guns N’ Roses recently headlined the Download festival as part of their mammoth Not In This Lifetime tour. Their three-and-a-half-hour set featured covers of Velvet Revolver’s Slither, Glen Campbell’s Wichita Lineman and The Who’s The Seeker alongside material from their four studio albums.

They reissue their debut album, Appetite For Destruction, on June 29. It includes the massive Locked’N’Loaded limited edition, which comes in a solid wood, faux-leather covered box.