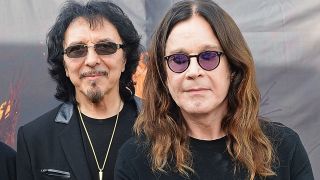 Tony Iommi says he’s been in constant contact with his old Black Sabbath bandmate Ozzy Osbourne recently due to the coronavirus pandemic.

Ozzy had been due to fly to Switzerland this month to undergo treatment for his Parkinson’s disease, but with US states and Europe currently in lockdown, the vocalist was forced to postpone the trip.

Speaking with Birmingham Live about what he’s been doing during the lockdown, Iommi says: “I’ve washed the car, cleaned the garage out, done all those little jobs that you realise needed doing, just like everyone else.

“Maria and I have been binge-watching TV, too – we’ve been doing Ozark and Boardwalk Empire – and I’ve been playing guitar. It’s a bit like being on tour without getting out to play. You’re stuck in the room each night.

“Neighbours have dropped a note through the door asking if I want any shopping. They’re looking out for the poor old sod!

“I think this has brought us all closer. I’m even in touch with Ozzy every day as he gets over his own health problems in Los Angeles.”

The sale is now live on eBay, and includes a signed Epiphone SG, a signed Supersonic Years box set, various signed versions of The End set, and a signed copy of the Dehumanizer CD.

The guitar comes with a case, picks, a pack of Iommi's personal strings, a letter of authenticity and photo of Tony with the guitar.

Bid on the Heartlands hospital auction.