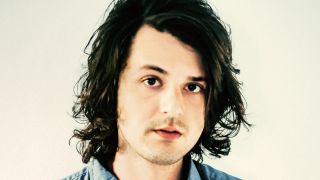 “I think the term ‘singer-songwriter’ sadly evokes a white guy in a coffee shop strumming a fucking G-chord all day,” says Locke. “I think this record sounds more like a band record… the band just takes occasional smoke breaks.”

Since Rooney’s demise, Locke has released two albums and a live EP as part of Taylor Locke and the Roughs and struck up a friendship with impresario Kim Fowley, which led to the recording of Time Stands Still.

“I was given a notebook of lyrics from the legendary songwriter and manager Kim Fowley and decided to use those as a jumping off point. I was in sort of a loner mode and unsure if I wanted to start another band. I searched through the Fowley lyrics and showed the ones I liked to my friend [LA songwriter] Kelly Jones who had impressed me with her recent solo album Alta Loma. We wrote a couple songs using the Fowley lyrics but quickly exhausted that source and began moving in a new direction. We were going to call this project the Fowleys and make it a band thing but Kim said he’d sue the shit out of me. That made the decision to go solo pretty easy. I guess Kelly became the female J.D. Souther for this project.”

Time Stands Still is released on February 23, and can be pre-ordered from Lojinx now. The whole album can be streamed below.