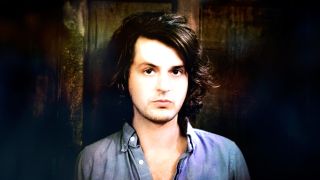 We’ve all been there, when a relationship you’ve spent years devoting yourself to splutters to a halt. It’s a confusing, disorientating time. In Taylor Locke’s case he was dealing with the demise of Rooney, the LA-based five piece he played guitar in for over a decade. Looking and sounding like a West Coast version of the Strokes, they were pretty, had good hair and major label backing, but somehow it never worked out, and after their last album in 2010 Rooney went on ‘indefinite hiatus’.

The guitarist is philosophical about the split now. “Times were changing, people were growing up and sometimes — like any relationship — people get cast into their role. Some of us wanted to try something new outside the parameters that had already been cemented.”

Initially this meant a garage band, The Roughs, who Locke helmed over the course of three albums, Loud Lion, a tongue-in-cheek side project that emulated Mutt Lange and Hysteria-era Def Leppard, and Rumours, a Fleetwood Mac tribute act. After the former two ran their course, Locke needed some time out. “At that point I’d been making records and touring for over 12 years, since I was a kid really. I’d started to build a recording studio in LA and I felt it might be just nice to sit in one place for a while and get some other things going in my life. I wanted to hit the eject button and not have to deal with any of the machinations of the music industry.”

But even as Locke kicked back, a sage-like figure entered his life to usher him back into the industry’s arms. Not just anyone either, but one of its most notorious characters — Kim Fowley. Locke interviewed the late svengali for a web TV show and the pair quickly became buddies. “We had a great time hanging out,” Locke remembers. “Yes, he was cartoonish. But he wasn’t like this old man where it’s like ‘oh he’s so ridiculous, what funny things he’s saying!’ He knew he was being ridiculous. The way he carried himself, his hand gestures and the way he spoke… it was like performance art.

“So we kept in touch. I played him some stuff I’d recorded in my studio, and he was really encouraging. He said, ‘you’re kind of like a Todd Rundgren guy, post-Beatles Lennon guy’, then suggested that we write something together. So he went through his vault of lyrics and pulled out a whole load of pages.”

Locke began using those lyrics as a springboard, sometimes keeping the titles — his debut solo album Time Stands Still contains a number of Fowley co-writes — but often simply using them to inspire his own songs. Locke even considered utilising ‘The Fowleys’ as a name for the project before his mentor dug his heels in. “He banned me from using it,” Locke laughs. “He said ‘it’s confusing, weird and I’ll sue you if you try to use it.’”

Instead the album goes out under Locke’s own name and contains a number of songs that ponder the fate of a fading ex rock star. “There was a great singularity to being in a band like Rooney,” he reflects. “You make a record, go on the road, take pictures, do interviews, make videos. You’re on autopilot and then it ends. And you don’t have a job. So it was like ‘what now?’”

“So yeah this is a very personal album. Even the title — which was Kim’s phrase — really resonated with me. It’s that feeling you get when it feels like things are stuck, that you’re treading water.”

Of course, the happy ending is that from that low point he’s managed to produce an album which — if there’s any justice — should do very well. Just as Fowley indicated, it takes its musical cues from the mellower end of 70s rock, in particular Big Star, Todd Rundgren and Gerry Rafferty. It’s reflective, funny (especially on the get-over-it list song The Art Of Moving On) and clearly the work of an accomplished songwriter who’s not ready to hand in his rock star badge just yet. “The good thing is that things have come full circle now,” Locke says. “All these songs are about isolation and trying to figure out what I’m good at, what I should do with my life. And now I know what it is — to promote this album and make another one.”

Time Stands Still by Taylor Locke is out now via LoJinx.